As you may recall, last month's appearance of everybody's favorite colon cleanser was marred (well, only a little bit) by a request for reciprocal links by someone calling himself "Poop Doc." I rather suspected at the time that our heroic, pointy-headed defender of bowel health was the reason why someone calling himself Poop Doc thought I might be interested in reciprocal links. I suppose it could have been my scintillating writing and well-informed rants against pseudoscience and quackery, but somehow I doubt that's what it was, as you'll see. Certainly it wasn't my infamous Orange Man piece from a few months ago.

In any case, I ignored him the first time. Too bad he didn't ignore me. During the past week and a half, I received not one, but two e-mail messages like this:

My name is Scott Olsen, and I manage a web site about Constipation:

The other day I wrote you to let you know I'm very interested in exchanging links. I'm sending this reminder in case you didn't receive my first letter.

You can automatically get a link back to your site by using the form below and send you a list of our other sites for links as well or reply with your details and we will post it as soon as possible.

As you know, reciprocal linking benefits both of us by raising our search rankings and generating more traffic to both of our sites. Please post a link to my site as follows:

Title: Constipation
URL: http://www.poopdoc.com
Description: Now, an all natural discovery allows you to Get Constipation
Relief on Demand.

Once you've posted the link, let me know the URL of the page that it's on, by entering it in this form:

You can also use that form to make changes to the text of the link to your site, if you'd like.

Thank you very much,

Argh, I say again! What hath EneMan wrought? Because it was probably EneMan whose appearances got this guy on my case, I decided that Eneman would have to deal with him. So I e-mailed EneMan (if you've ever encountered him in person at a medical or surgical meeting, you would know that he doesn't talk; so phoning him was out of the question) about some of Poop Doc's claims. 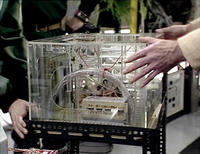 Orac: I appear to have acquired an altie groupie, either that or a spambot. Tell me, EneMan, what do you think of these claims? Here's one:

PoopDoc is a full intestinal and colon cleanser which has been formulated to melt away compaction in the bowel and provide oxygen to the intestinal tract and carried through the bloodstream throughout the body. PoopDoc doesn’t just clean out the colon, it cleans the colon, small intestine, and large intestine—all without the side effects of laxatives or psyllium based cleansers. While psyllium and other fiber products simply scrape matter out through the center of a clogged colon, PoopDoc removes old, impacted fecal matter as it detoxifies and cleans the entire intestinal tract.

Over time undigested food and waste material build up in the intestinal tract and colon. This is a perfect breeding ground for anaerobic bacteria, which if left alone could cause serious health problems. Many strains of Anaerobic bacteria can be harmful in our digestive system. This type of bacteria cannot survive in a healthy, oxygen enriched environment, such as a healthy digestive system.

PoopDoc cleans the entire 25-30 feet of the digestive tract. It is designed to clean, oxidize and reduce the amount of impaction and hard fecal matter in the small intestine, large intestine and colon. Other cleansers focus on the colon and stimulate mucous production instead of breaking down hard fecal matter. 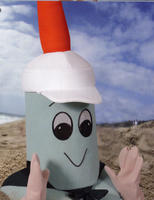 EneMan: Oh, dear. This Poop Doc guy seems really fixated on the colon and feces, doesn't he? It's understandable that I might be fixated on such things (it's my purpose in life, after all), but why is an otherwise healthy guy so worried about "cleansing" his colon? And what was all that silliness about oxygen and free radicals? "Poop" contains huge amounts of bacteria, many of which are anaerobic, but under normal conditions those bacteria are actually necessary for good health. Antibiotic-associated diarrhea can result when those normal "good" bacteria are killed off by antibiotics and one particular bacteria, Clostridium difficile, overgrows. Really, I may be an overgrown enema, but even I don't have that inflated a concept of what I'm good for or spout a bunch of impressive-sounding pseudoscientific bunk to justify my existence. I have only a couple of purposes: to clean out the rectum and lower colon, usually in preparation for some sort of endoscopy; to help relieve moderate constipation or stool impaction. And I'm quite good at it. I don't have delusions of grandeur that I can do anything more than that. After all, I'm just a 6-foot Enema with a job to do, but I'm not going to "detoxify" you or cure any major diseases.

Orac: Indeed, EneMan. You're quite good at what you do. But what do you think about this altie obsession with "cleansing" the colon? I mean, so many altie remedies emphasize "cleansing" the body of "impurities," whether it be chelation therapy for cardiovascular disease or autism or various "flushes" designed to "clean out" the colon or liver. I mean, what's with that?

EneMan: I don't understand it either. It's as though they view their own waste products as inherently "harmful." They also have an obsession with their "purity of essence" that would rival that of General Jack Ripper. But what do you think the colon evolved to do, if not to take care of normal solid bodily waste? And don't they realize that in a normal healthy individual the bacteria in the colon are not only not harmful, but they are helpful? Heck, they help us digest and absorb certain nutrients! Why on earth would they think a colon needs any help in an otherwise healthy individual, other than eating enough fiber and limiting consumption of red meat? Heck, even more silly is the claim that you can somehow "clean out" all 25 feet of the small and large intestine with his product. Anyone who's ever had to do a bowel prep for surgery or colonoscopy knows that GoLytely (a misnomer if ever there was one) is quite effective if you really want that "clean" feeling. I don't recommend it, though, and anyone who's ever had to drink a gallon of the stuff knows why. Besides, frequent purging, enemas, and cleanses can screw up your colon function big-time, and I'm totally against that!

Orac: So can you help me out here? I cannot abide such illogic and have far more interesting problems to which to apply my circuitry than refuting such hangers-on. Can you talk to that guy and tell him to quit bothering me? It's clear to me that if he actually read what was on my blog he would realize I'm really not the sort of guy he wants to exchange links with.

EneMan: Of course you're not. Anyone can see that!

Anything for you, Orac baby! Perhaps I could pay him a visit, if you like. I could even offer my services to him. Clearly his obsession with colon cleansing should be rewarded with the ultimate colon cleanse, and who better for the job than me? Can you imagine his reaction when a huge walking Fleet enema shows up at his business or house?

Orac:Somehow I don't think that would help, unfortunately. I'm also afraid he might want to add you to his product line! That would be unacceptable to me, as you seem to have acquired too many fans around here. I'll just deal with him in my own fashion, namely with my characteristic snark and giving him what he wants, but not in the way he wants it.

Thus ended the exchange. EneMan understood. And, really, he did seem a bit too eager to ply his skills on Poop Doc, which made me very reluctant to actually set him loose.

However, that gives me an idea, though. Perhaps I could send EneMan to pay a visit to Pat Sullivan, Jr., who has been drowning the comments section of posts here and here with his verbiage, most of which consists of regurgitating Dr. Buttar's claims that his "transdermal" chelation system is a successful "biologic" treatment for autism while making laughably lame excuses for why Buttar hasn't yet done some very simple tests to show that his concoction actually is absorbed through the skin and gets into the blood to, oh, actually chelate mercury, as he claims, and the rest of which seem to involve claiming that Dr. Buttar doesn't need to prove that his concoction chelates anything because he has "empiric evidence" that it works. Never mind that Dr. Buttar hasn't published any of this evidence, which appears to consist of mainly testimonials, in any actual medical journals.

On second thought, maybe siccing EneMan on Pat isn't as a good idea as it sounded at first, tempting though it may be. The load Pat's dropped on this blog over the last couple of nights suggests to me that perhaps he's already had an encounter with our colon cleansing mascot in the recent past. (Either that, or perhaps he's one of Poop Doc's customers.) Given that Pat's already declared victory (labeling himself a "giant killer," yet!--snicker) and left in a huff of self-congratulatory puffery, maybe it's best not to send EneMan after him. It might provoke the dropping of yet another load of more of the same. On the other hand, one can only hope that there's nothing left for him to drop, but sadly I suspect that, with Pat, there's always some more.

Instead, why don't we just pay our mascot with the hat whose function you really don't want to think too closely about yet another of his traditional visits. Fortunately, these pictures aren't as creepy as last month's, but I still find his affinity for hanging out with young children a bit disturbing.

September 2005
And, for those of you who are new to the phenomenon that is EneMan, I provide a list of all his appearances since the very beginning: