You know, after eight months of blogging and using this odd little guy as the mascot of Respectful Insolence, I was running out of clever and pithy ways of introducing his appearances every month. Indeed, this month, due to the oddly distubing nature of one of the pictures, I was almost just going to post them with minimal commentary. (You will see what I mean in a moment.) Fortunately, my decision to hold off for one day on the usual monthly appearance of that champion of colon health with the hat no living creature should wear on his head out of respect for my parents' 46th wedding anniversary resulted in my seeing a piece of e-mail that I normally wouldn't have seen before everybody's favorite Fleet mascot had already been posted (mainly because I received it yesterday):

My name is XXXX, and I run the web site about Constipation:

I recently found your site http://oracknows.blogspot.com and am very interested in exchanging links. I've taken the initiative and posted a link to your site, on this page:

As you know, reciprocal linking benefits both of us by raising our search rankings and generating more traffic to both of our sites. Please post a link to our site as follows:

Title: Constipation
URL: http://www.poopdoc.com/
Description: Now, an all natural discovery allows you to Get Constipation Relief on Demand.

[Remainder deleted, and I'm not putting actual links in]

It's bad enough that I've been linked to from a gay bondage forum before because of our favorite colon cleanser. (The guys there thought he was quite amusing and one suggested he would like to get his hands on an EneMan costume for purposes that I really don't want to contemplate.) Now I'm getting altie pitches for "natural constipation relief." On the other hand, EneMan seems to be pretty popular, and I get lots of hits from Google searches looking for EneMan pictures. I suppose, blog publicity whore that Orac is, any link that leads eyeballs to Respectful Insolence is probably a good thing. Even better, anyone looking for "colon cleansing" information who happens to look over his links will be lead here, where hopefully some of the emphasis on evidence-based medicine will rub off.

In any case, this particular webmaster apparently hasn't actually read my blog. (For example, has he seen my post about the Orange Man?) If he had, he would know right away that I'm not exactly the kind of guy who's receptive to pitches like this:

PoopDoc is a full intestinal and colon cleanser which has been formulated to melt away compaction in the bowel and provide oxygen to the intestinal tract and carried through the bloodstream throughout the body. PoopDoc doesn’t just clean out the colon, it cleans the colon, small intestine, and large intestine—all without the side effects of laxatives or psyllium based cleansers. While psyllium and other fiber products simply scrape matter out through the center of a clogged colon, PoopDoc removes old, impacted fecal matter as it detoxifies and cleans the entire intestinal tract.

Over time undigested food and waste material build up in the intestinal tract and colon. This is a perfect breeding ground for anaerobic bacteria, which if left alone could cause serious health problems. Many strains of Anaerobic bacteria can be harmful in our digestive system. This type of bacteria cannot survive in a healthy, oxygen enriched environment, such as a healthy digestive system.

PoopDoc cleans the entire 25-30 feet of the digestive tract. It is designed to clean, oxidize and reduce the amount of impaction and hard fecal matter in the small intestine, large intestine and colon. Other cleansers focus on the colon and stimulate mucous production instead of breaking down hard fecal matter.

Oooh boy. I've actually been meaning to blog on this altie obsession with "cleansing" the digestive tract, and, with EneMan's help and the above as a reminder, I may just do it in the next few days. In the meantime, here's a little wafer to cleanse the palate. Suffice it to say that the above paragraph is utter B.S., particularly the part about the oxygen. There are plenty of aerobic and anaerobic bacteria in the colon, normal commensal residents. This appears, in my experience, to be a common altie misconception that, just because C. difficile colitis is a result of a species of anaerobic bacteria that can overgrow and cause colitis when antibiotics kill off the normal bacterial flora, anaerobic bacteria are all bad and aerobic bacteria are "good." Never mind that E. coli, a species of aerobic bacteria, is the most prevalent species of bacteria in the colon, and that certain E. coli strains can cause severe colitis as well. He also doesn't seem to have a clue what reactive oxygen species are (commonly known as free radicals). At least, that's what I think he was referring to. Hint: They aren't "O1atoms." O2-, OH-, or *OH, maybe, but not "O1atoms."
Maybe EneMan can serve as "fly paper" to draw these altie colon cleanse pushers in to be debunked. On the other hand, it makes me wonder why EneMan isn't considered an altie. Maybe because he's the mascot of a dreaded pharmaceutical company. No doubt he's a "pharma shill." (I suppose the hat is a dead giveaway.)

But back to our monthly Ene-fest. This month, apparently, is EneMan's birthday, and the pictures from the three calendars I have reflect that. First, the 2002 calendar: 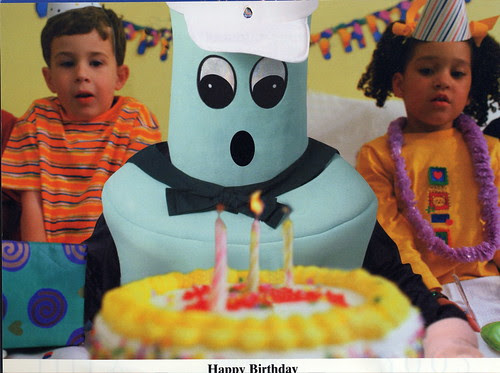 August 2002
OK, fairly pleasant. Not so bad, right? (Those kids in the picture don't appear all that happy, though, do they?) But, two years later, we have this one (WARNING: not for the faint of heart): 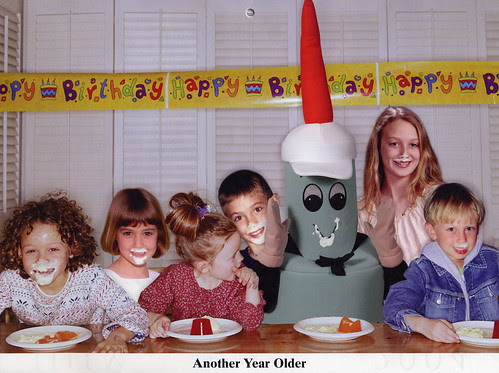 August 2004
I may be scarred for life by this picture. I also don't know what it says about me that I thought such crude thoughts about this particular picture, but it can't be good. (On the other hand, what does it say about Orac that he has a tall guy dressed in a giant enema suit, complete with "business end," as the mascot of his blog?) The only redeeming feature is that some of the kids (particularly the blonde, somewhat older girl to EneMan's left) appear to have been Photoshopped into the picture. Maybe some of them escaped the horror.

Fortunately, this year's photo is much less disturbing and even rather uplifting (although I wonder what my U.K. readers will think): 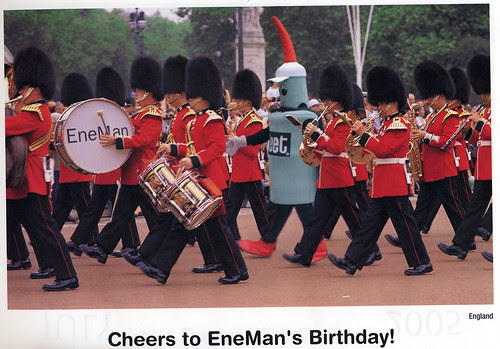 August 2005
Well, that concludes EneMan's appearance for August. He will return next month, as always. And, of course, as always, here is a list of every appearance our intrepid colon health defender has made here since the very beginning:
July 2005
June 2005
May 2005
April 2005
March 2005
February 2005
January 2005
EneMan's first appearance (December 2004)
And, so far, it looks as though, despite threatening to do so last month, the Hitler Zombie has yet to mount a serious challenge to EneMan for control of the blog mascot franchise. But stay tuned. It may well someday come to a slapdown between the two for control of this blog.