Friday snowy fluff: Here's a way to get into the Christmas spirit! 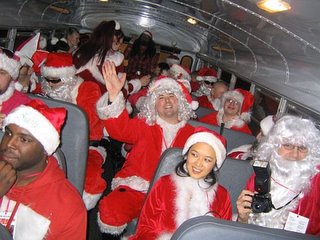 Christmas is nigh, and I really haven't gotten into the spirit much. Indeed, I can hardly believe it's only a bit more than two weeks away. Then a couple of weeks ago, my sister asked me if there was any chance that I could make it to an event that she was planning on attending, namely Detroit Santarchy.

As you may know, I grew up in Detroit and environs, and most of my family is still there. My wife and I had been planning on heading back that way anyway for the holidays. Consequently, I was highly tempted and a bit bummed out when it became apparent that there was no way I'd be able to go, for reasons that you will see. 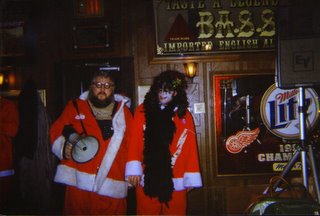 So what is Santarchy? I had never heard of it before. How could that be? It turns out that Santarchy is basically a pub crawl in which everyone involved dresses up like Santa. An article in the MetroTimes about last year's festivities started:

Last Saturday, I saw Mommy kissing Santa Claus. Then I saw Santa grope Mommy. Then I saw Santa dangling upside down from a rail fence, slurping from a beer bong, stumbling through the streets slurring indecipherable expletives, and finally, horking his guts up by the curb. 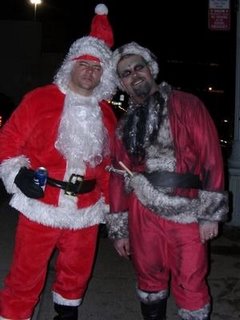 What better way to get into the Christmas--shall we say?--spirit? I mean, how could you not have fun doing a pub crawl dressed as Santa? I mean, look at the pictures! And there are plenty more where that came from here, here, and here. Perhaps the reason I had never heard of it is because it has only been going on for five years, and I haven't lived in Detroit since the late 1980s. Here's a little more background. It turns out that Santarchy is a worldwide phenomenon:

Detroit Santarchy (detroitsantarchy.com) was founded five years ago by Len Puch, musician, Michelangelo of metalwork (speedcult.com) and local celebrity/mad scientist (he built a rollercoaster in his backyard, among other creations).

Puch first learned of Santarchy from a friend in New York, and decided to form a Detroit branch. For the virgin run, only a dozen or so people showed up, but the event has grown exponentially each year; last year drew more than 150 Santas.

Each year Puch draws up a list of Detroit bars, with 45 minutes allotted for each stop. Ten bucks gets you transport on one of the Santa buses, and entry to each bar. The only rule: You must be in a Santa suit (or elf, or some other derivation) to ride the bus. Puch warns the bars ahead of time so they have enough staff on hand, but he says they’re always welcoming.

“They love it now,” Puch says. “You have 45 minutes of Santas who drop a grand on booze and then leave.”

150 Santas last year? I wonder how many will show up this year.

Then I looked at the date for this event on the website: December 17. (Traditionally, in Detroit Santarchy is held on the Saturday before Christmas, but this year they're doing it a little early because Christmas Eve is on a Saturday and the bars close early. Besides, even degenerates prone to getting drunk in Santa suits usually still like to be with their families on Christmas Eve.) Unfortunately, I'm on call that weekend. Going back to Detroit to be involved in a drunken pub crawl with a bunch of people dressed up as Santa would not be an adequate reason to try to get out of my commitment. (I know, to some people it might be, but I have a sense of duty. Besides, my call schedule is relatively light compared to most surgeons; so it would seem quite unseemly to try to get out of even that little bit of call for the whole weekend. Usually such things are only done for deaths or illnesses in the family.) Also, it wouldn't be as much fun if my wife didn't go along with me, and somehow I suspect that getting her into the Santa suit would be a hard sell. Consequently, I resigned myself to having to enjoy the festivities vicariously through the photos my sister promised to take. 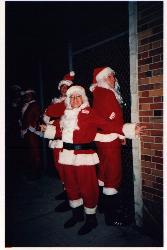 Depressed at the prospect of there being no possibility of passing out somewhere in a Santa suit, except perhaps somewhere alone, with no other Santas and not associated with Santarchy (which would really be pathetic, not to mention rather hard to explain to my wife), I started surfing the links. It turns out there is a bit of a test to see if you are "Santa enough" to participate in Detroit Santarchy. Being a sucker for silly online tests, I took it. Sadly, I scored only 85, which led to this summary:

While not completely lame, you do make for a weak Santa. And while some might think that should exclude you from participating in Santarchy, it's just possible that by attending you will actually discover your true, inner, fully disfunctional, Santa. 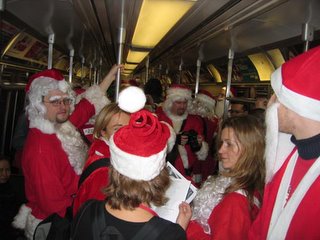 Given that Santarchy is an international phenomenon, I wondered if there were a similar event closer to home. I almost didn't bother to look, because I was still scheduled to be on call the weekend of the 17th. That meant two things: First, I couldn't drink. At all. Period. That would leave only the entertainment of watching a bunch of people in Santa suits get progressively more drunk. (On second thought, that might be pretty fun.) Second, I had to stay within about 10-15 miles of the hospital, which greatly limited potential places I could go. The second problem seemed far more insurmountable than the first, and both seemed to make any participation by me in such an event impossible, but nonetheless curiosity got the better of me. I looked around through the Santarchy site.

There was indeed a Santarchy event in New York City. Even better, it's not on the 17th. 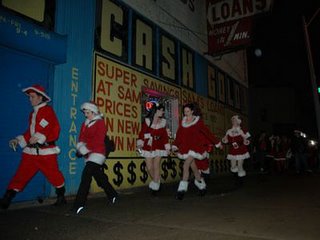 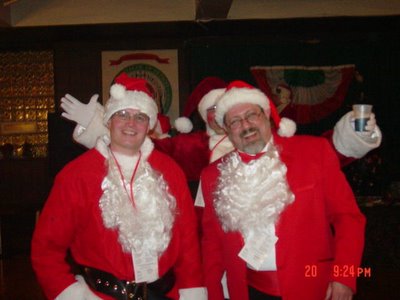 I wonder if it's possible to find a couple of cheap Santa suits fast around here... 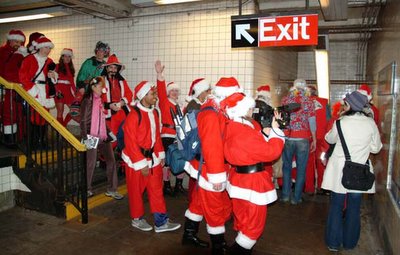 Ah, who's kidding himself? I'm not the kind of guy who dresses up in a Santa suit with 100+ other people and goes on a pub crawl. I didn't even do stuff like that when I was in my 20's. 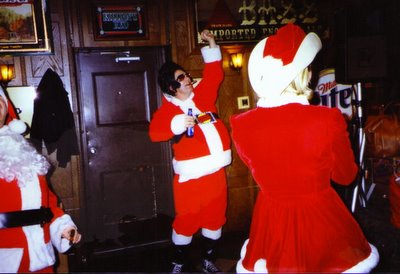