Oh, no, not again Toledo 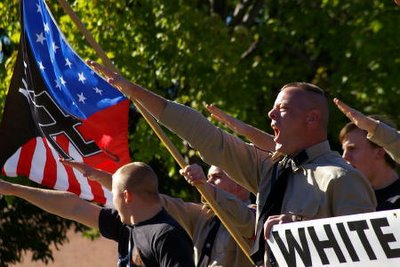 As you may recall, a couple of months ago, Toledo erupted in a riot after an attempted march by a neo-Nazi group known as the National Socialist Movement in a racially mixed neighborhood. Unfortunately, the city is now bracing for another intrusion by racists this afternoon:

TOLEDO, Ohio - Hundreds of police officers from across northern Ohio along with state troopers have been mobilized to guard against another riot fueled by a neo-Nazi rally.

Members of the National Socialist Movement planned to gather Saturday afternoon on the steps of City Hall. Two months ago, their planned march sparked a four-hour riot, in which businesses were burned and looted and bricks were thrown at police and an ambulance driver.

The violence scarred the city, prompting its leaders to examine race relations and efforts to combat gangs.

In October, the neo-Nazis said they wanted to protest gangs and rising crime in a Toledo neighborhood. This time, they say they want to protest how police and the city handled the October confrontation.

Anti-racist groups also were planning a counter protest Saturday to shout down the white supremacists.

City leaders fear protesters of the neo-Nazis will try to rally somewhere outside the downtown demonstration and incite more trouble.

A Lucas County judge granted the city's request Friday to block the neo-Nazi group and counter protesters from rallying beyond the downtown government building's grounds.

This time, the rally will be about two miles from the racially mixed neighborhood where the original march was to take place.

This time, the police seem more prepared. The city has sought and received an injunction that allows them to arrest the Nazis if they deviate from their planned course and enter residential neighborhoods:

A Lucas County Common Pleas Court judge yesterday gave Toledo police the authority to arrest any neo-Nazis who try to march in a residential neighborhood today.

Judge Thomas Osowik granted an injunction sought by the city barring assembly by the National Socialist Movement anywhere other than Government Center in downtown Toledo.

Bill White, of Roanoke, Va., spokesman for the neo-Nazi group, argued against the order in a hearing, calling it a violation of his constitutional right to free speech.

But Mr. White said he and his fellow neo-Nazis weren't planning anything other than the rally they had agreed to do at Government Center.

"All he's done is enjoined us from doing something we had no intention of doing in the first place," Mr. White said, adding that the judge ruled against case law.

Mr. White protests too much. The city would have been foolish indeed if it didn't try to protect itself from what might happen if the Nazis had a sudden "change of plan."

As I said before, I hate Illinois (and Ohio and any other) Nazis. However, I also support the First Amendment, which is why I find the jailing of Holocaust denier David Irving in Austria so odious. It is a delicate balancing act to protect the free speech rights of racist hatemongers like this neo-Nazi group and yet keep the city from erupting in violence again. Make no mistake, the purpose of these idiots is to provoke a violent response, which allows them to point to the response as "proof" that they are right about the minorities they despise. Unfortunately, last time, gangs played right into the neo-Nazi's hands and caused a riot. Given that history, the city appears this time to have taken reasonable precautions to prevent a repeat of what happened in October and yet still let this odious group have its pathetic little hate-fest. If, as I'm hoping, the event unfolds without violence, the television images will be of a tiny group of racists dressed in pathetic faux SS uniforms, waving Nazi flags, and donning the mantle of victimhood, all the while pretending that they matter as anything other than a reminder of what we as a society hope to leave behind.

That would be sweet indeed.

I almost wish these clowns could have held off a couple of weeks, when I will be in the Toledo area visiting the in-laws for the holidays. That might have been worth seeing in person.

ADDENDUM: Fortunately, the rally went off without violence and only a few arrests:

A nonviolent neo-Nazi rally in downtown Toledo yesterday started with agitation and ended with a prayer.

About 170 observers and counterprotesters stood in front of the TARTA bus station on Jackson Street, separated by a row of riot-clad officers, a median with trees, and a line of barriers. They held signs against hate and chanted for the 63 neo-Nazis, some in uniform, to leave.

Authorities reported no injuries or damage after the rally. They and the neo-Nazis said the event was a success.

However, not everyone agreed with the zero tolerance policy the police adopted:

Police showed zero tolerance, which some attendees supported and others questioned.

Vicki Conyers, 39, of North Toledo said she went to the rally for a couple of reasons and was pleased it did not turn out like the Oct. 15 incident, which she witnessed.

"They [police] got beat down the last time. Why shouldn't they be on edge?" she asked.

Others, such as Shaun Godwin, disagreed.

"They're just picking people out," the 26-year-old Ann Arbor man said. "Nobody has done anything."

Terry Lodge, a Toledo lawyer and longtime civil rights activist, said he was upset by what he perceived as police harassment. He noted how people constantly were brushed back by police horses. He also was disturbed by how some people seemed to have been arrested for being too vocal or animated.

"What you have in Toledo is martial law for a day," he said. "The whole business of shoving people back pre-emptively is wrong."

One outsider in the crowd agreed that security went too far.

"It's clearly police intimidation against the people of Toledo," said Shanta Driver of Detroit, who identified herself as a member of the National Women's Rights Organizing Committee.

J. Eaton, 26, of North Toledo said he saw police officers arrest a man after overhearing someone say that it appeared there was "something brewing" between him and others. "They're just abusing their power," Mr. Eaton said.

John Jackson, 21, of West Toledo said the neo-Nazis can spew all the rhetoric they want as long as they don't incite rioting in a black neighborhood again. "Just stay out of the 'hood," he said.

Although disappointed by some of the police tactics, Mr. Jackson was one of a fair number of people who gave police credit for maintaining order. He said he recognized what law enforcement was up against. "They're just doing their job," he said.