In which grant writing forces me to steal from PZ...

Sorry, all, but I've been up quite late two days in a row putting on the finishing touches on a grant application. Yesterday's post on HIV denialists somehow got out of hand, becoming far longer than I had intended. It also kept me up an hour later than I had to be. Have you ever, after working really late on a big project, been so wired that you didn't feel at all sleepy? Such was my situation last night at around 3 AM, when I couldn't stand looking at the same text yet another time. This lead to me taking nearly an hour to add to what I had started a couple of days ago as an intended plug of Trent's article, resulting in a much longer article than originally intended.

Tonight--or should I say "this morning"--the situation is different in that I'm now quite tired. Apparently my training from surgical residency days plus my advancing years have sapped my ability to deal with the prodigious levels of sleep deprivation that I used to subject myself to on a routine basis. Consequently, I'm just going to respond briefly to a meme that PZ Myers seems to be starting, in which, after posting his SiteMeter stats for percentages of visitors from various nations, he asks:

Any other webloggers out there want to share their political inclinations and international appeal?

Why the heck not? It's been weeks since I even bothered to check that part of my SiteMeter logs. So, here it is: 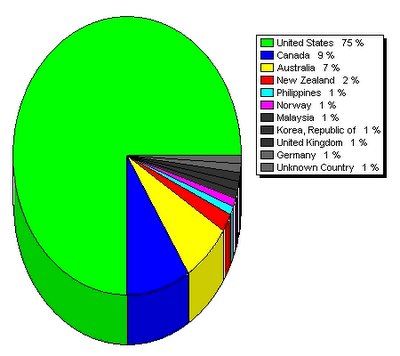 I guess my "international appeal" isn't as great as PZ's. 84% of my visits come from North America. There are still a couple of surprises. For one thing, I didn't think there was such a big Australian and New Zealand contingent in my readership. For another thing, I'm surprised that my U.K. readership is so small.

As for my politics, well, let's just say I'm a bit to the right of PZ.

Oh, and don't worry. I haven't forgotten about the usual visitor who shows up around the first of each month. I'm just too tired to scan the necessary pictures right now...
Email Post