Christmas is coming and guess who's here...

I had been debating how to handle this month. As you may or may not know, on or about the first of every month, it's become a bit of a tradition around here to be paid a visit by what has become the de facto mascot of this blog. When I first wrote about him last December in a post about strange things I've gotten from pharmaceutical reps, I had little idea how prominent a role he would come to play or how popular he would become. He kind of got out of hand.

As December approached, I realized that this would be EneMan's last appearance in 2005. It's hard to believe it's been over 11 months since he first showed up. For the last month or so, I had been concerned about what would be in store for 2006. You see, I hadn't received the latest EneMan Calendar as of early this week and was starting to get worried that somehow I had dropped off Fleet Pharmaceutical's mailing list. (Maybe someone from their PR department found out who I was and that I was appropriating their company mascot and didn't like it, I speculated. I started wondering if I'd have to start calling the Fleet rep or even think about retiring a guy who likes what he does entirely too much. (Just look at the silly smile that's always plastered on his face.) If I didn't get my calendar, the only other option would be to recycle old pictures, and I didn't want to do that. Also, consider this. If EneMan were to be retired, the Hitler Zombie is waiting in the wings to take over the mascot slot, and, believe me, no one wants that. For you Conan O'Brien fans, it would be kind of like the Masturbating Bear taking over for Triumph the Insult Comic Dog. Or worse.

Nonetheless, regardless of whether or not I had received the 2006 EneMan Calendar, it was still obvious that I had to stick with a holiday theme. While PZ is advocating celebrating a holiday known as Cephalodmas (yes, his fixation with cephalopods is getting a bit out of hand), in contrast, Respectful Insolence's intrepid blog mascot, that dedicated defender of colon health, that big, green--well--bottle is a bit more of a conventional sort of fellow. Yes, the holidays are just around the corner, and he's getting ready. In fact, he's so into the spirit of things, as you can see, that he neglected to turn in a column debunking some dubious treatment or other. In fact, I'm a bit disappointed, as I had wanted to send him over to pay a visit (dressed in his Santa Claus suit, of course) to a certain pesky cybersquatter, who, given his behavior of late, certainly seems as though he would probably benefit greatly from EneMan's ministrations.

But no, I couldn't do that to him (EneMan, that is). The poor guy'd probably be traumatized for life. He is a gentle soul, you know. Just look below. 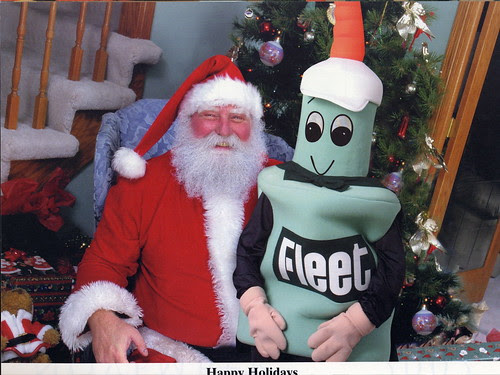 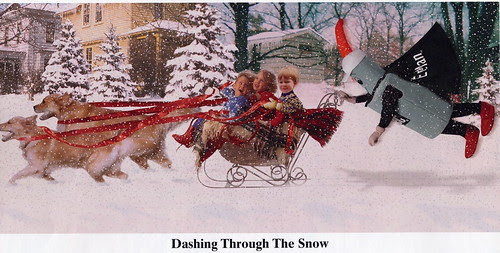 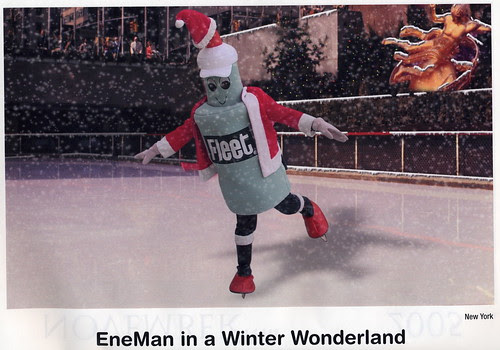 December 2005
How could I subject such a happy-go-lucky soul to someone like him who shall no longer be named on this blog?

POSTSCRIPT: Fortunately, the other day, a large envelope arrived at my office from Fleet Pharmaceuticals. I ripped into it.

It was the 2006 calendar! Fleet hadn't abandoned Orac after all. And, like last year's calendar, this year's calendar has a theme. You may recall that the theme for 2005 was "EneMan Travels the World." Personally, I thought it was a bit dull. The 2006 theme, however, shows real promise. Ask yourself: How could EneMan top traveling the world and being photographed in all sorts of famous locales?

You know, these guys putting together these calendars are getting stranger and stranger each year. However, this does give me a wicked idea, a wicked, wonderful, awful idea.

Oh, Sha-aron! It might be time for me to think about asking you to let me host the History Carnival again. What do you think?

Finally, as always, here is a list of all the past appearances of EneMan, for those of you new to the phenomenon: