You can't make stuff like this up: Mel Gibson is planning a TV miniseries about the Holocaust 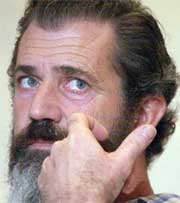 I had been planning on posting about something completely different today, namely a far more medically related topic, but then I came across this, and my plans changed. The previously planned post will appear some other day.
I have to file this under You Can't Make Stuff Like This Up:

LOS ANGELES, Dec. 6 - Mel Gibson, whose "The Passion of the Christ" was assailed by critics as an anti-Semitic passion play - and whose father has been on record as a Holocaust denier - has a new project under way: a nonfiction miniseries about the Holocaust.

Mr. Gibson's television production company is developing a four-hour miniseries for ABC based on the self-published memoir of Flory A. Van Beek, a Dutch Jew whose gentile neighbors hid her from the Nazis but who lost several relatives in concentration camps.

It is not expected that Mr. Gibson will act in the miniseries, nor is it certain yet that his name, rather than his company's, will be publicly attached to the final product, according to several people involved in developing it. Nor is it guaranteed yet that the project will be completed and broadcast.

But Quinn Taylor, ABC's senior vice president in charge of movies for television, acknowledged that the attention-getting value of having Mr. Gibson attached to a Holocaust project was a factor.

ABC brought in Mr. Gibson's company, Con Artists Productions, after an independent producer, Daniel Sladek, pitched the network on Ms. Van Beek's story. With her husband, Felix, Ms. Van Beek survived the sinking of a passenger ship by a German mine, followed by three years in hiding during the German occupation of Holland, before emigrating to the United States in 1948.

"This has the middle, the love story, that the other one didn't have," he explained.

Mr. Sladek said ABC's calculation in engaging Mr. Gibson was to win the largest possible audience. "I think that what ABC wants out of this is to build the biggest billboard imaginable in order to get everyone logically interested to tune in and watch this," he said.

Ms. Van Beek's book, "Flory: Survival in the Valley of Death" (Seven Locks Press, 1998) is a wide-eyed account of her and her husband's abbreviated courtship; their attempt to sail to safety in Chile; the sinking of their ship, and their rescue and recuperation in England; their return to Holland in 1940; and their suffering in hiding as the deportations of Jews began. They were liberated by Canadian troops, but only 5,200 of Holland's 140,000 Jews survived the war, according to Mr. Sladek's research.

You may recall from a couple of years back, round about the time Mel Gibson was making The Passion of the Christ, Jewish leaders expressed concern that the movie, with its intentionally violent and bloody depiction of Jesus' death, would stir up anti-Semitism. His father Hutton Gibson didn't help matters any by giving an interview to the New York Times and to radio stations in which he openly denied the Holocaust. One example:

In his interview on WSNR radio's Speak Your Piece, to be broadcast on Monday, Hutton Gibson, argued that many European Jews counted as death camp victims of the Nazi regime had in fact fled to countries like Australia and the United States.

"It's all -- maybe not all fiction -- but most of it is," he said, adding that the gas chambers and crematoria at camps like Auschwitz would not have been capable of exterminating so many people.

"Do you know what it takes to get rid of a dead body? To cremate it?" he said. "It takes a litre of petrol and 20 minutes. Now, six million of them? They (the Germans) did not have the gas to do it. That's why they lost the war."

A transcript of major parts of the interview has been posted here. Hutton has also addressed various Holocaust "revisionist" conferences, such as the Barnes Review.

Not entirely surprisingly, Hutton is also a conspiracy theorist. He believes in various complicated conspiracies involving Jews and Masons to destroy the Catholic Church, having stated that that Vatican II was a "Masonic plot backed by the Jews" and that all popes since then have been illegitimate. (Of course, it has been noted that one of the major changes introduced to Catholic doctrine in Vatican II was the reversal of the teaching that blamed the Jews for Christ's death.) It is unclear how much his son shares in these his father's conspiracy-mongering, but Mel does belong to the same breakaway conservative sect (sometimes called "Traditional Catholic") and financed the building of a church in Malibu for fellow ex-Catholics. (Members of this sect are, in fact, no longer Roman Catholics. Their doctrinal differences with the Church are too marked, and they do not recognize the authority of the Church or the Pope, nor is Gibson's Malibu church affiliated with the Archdioses of Los Angeles in any way. Nonetheless, Gibson is often misrepresented in the press and media as being nothing more than a very conservative Catholic.)

Do I believe that there were concentration camps where defenceless and innocent Jews died cruelly under the Nazi regime? Of course I do; absolutely. It was an atrocity of monumental proportion.

And in another interview with Peggy Noonan for Reader's Digest in which Noonan asked him point-blank: "You're going to have to go on the record. The Holocaust happened, right?" Mel replied:

I have friends and parents of friends who have numbers on their arms. The guy who taught me Spanish was a Holocaust survivor. He worked in a concentration camp in France. Yes, of course. Atrocities happened. War is horrible. The Second World War killed tens of millions of people. Some of them were Jews in concentration camps. Many people lost their lives. In the Ukraine several million starved to death between 1932 and 1933. During the last century 20 million people died in the Soviet Union.

Notice that he didn't just answer, "Yes, the Holocaust happened." I've heard Holocaust deniers say very similar things on many occasions, usually emphasizing that "many millions" died in World War II, and that "some of those killed were Jews" who died in concentration camps. They also try to minimize the crime by mentioning other atrocities ("atrocities happened"). Characteristically, there is usually (as above) no mention of gas chambers and no mention that millions of Jews were murdered as a matter of Nazi policy. Indeed, Mel's statements are entirely of a piece with a common portrayal of the Holocaust by deniers as many Jews dying in concentration camps of disease and starvation, but not due to any organized, systematic plan by the Nazis to exterminate them. And, then, of course, notice the pointed mention of Communist atrocities, a mention whose purpose is rarely to compare atrocities in historical perspective but more often to minimize the Holocaust compared to the crimes of Communist regimes.

Do the above statements mean that Mel Gibson shares his father's beliefs? Not necessarily. However, at the time I did find his obvious equivocation about the subject somewhat worrisome, and I haven't been able to find any more recent material to clarify his views. Perhaps Mel does not want to anger his father by directly contradicting his Holocaust denial in a public interview. Or perhaps, unlike his father, he is much slicker about expressing such views in public. I simply don't know. Perhaps I'm reading too much into a rather old interview, but statements like the above set my denier detection antennae twitching. (You're probably fortunate that I wasn't blogging back then, because I'd have been all over this, probably to the point of boring you all.)

If this miniseries is ever actually made and if Mel Gibson actually produces it himself, it will certainly bring the issue to the fore again. Of course, this story could all be a bit of premature hype designed to gin up interest in the project, or it could be a trial balloon. Even so, if this project does actually go forward I'd still be very curious to see what Mel Gibson does with the topic, although I'd approach it with a bit of trepidation. At the very least, though, it would bring this topic up again and give Mel a chance to clarify his beliefs--or once again fail to clarify them.
Email Post