The Art of Medicine in Ancient Egypt, Part 2 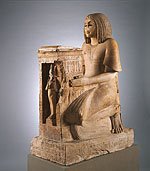 Last week, I wrote about my visit to the Metropolitan Museum of Art's exhibit The Art of Medicine in Ancient Egypt, where I enjoyed examining the Edwin Smith Papyrus. This papyrus, as you may recall, is one of the earliest surviving medical texts, and what is remarkable about it is that the knowledge is presented as a series of case reports not all that much unlike the way we sometimes present cases today. What I discussed last time was mostly the management of head wounds, and I picked a couple of cases from the papyrus to illustrate that the practical management of these head wounds is not all that different today in some ways. I also rather like the way that the Egyptian physicians divided diseases and wounds into "an ailment I will handle" (a problem for which there was a treatment), "an ailment I will fight with" (a problem for which the treatment was less certain), or "an ailment for which nothing is done."

I had been planning on moving on to a different type of injury for the second part of my series, but then I looked at the very first case again and noticed something that perhaps I should have talked about last week. So, hopefully it won't perturb anyone if I revisit the ancient Egyptian method of treating head injuries. I'll get to different injuries and illnesses in the next installment. For the moment, I'd like to revisit the head injuries. Bear with me, and I think you'll see why. So, here is the first case on the Edwin Smith papyrus, a rather straightforward scalp laceration (note that this part of the papyrus is fragmentary, leaving gaps):

Case 1. A Flesh Wound in the Head

TITLE: Practices for a man who suffers from a wound in his head, which has reached to the bone of his skull without gaping.

TREATMENT: You have to bandage him with fresh meat the first day and treat him afterward with oil and honey dressing every day until he gets well.

Measuring a man's suffering in order to [...]. As for the heart, there are vessels from it to [every] limb. As for that on which any lay-priest of Seihment and physician puts his hands or fingers--[on the head, on the back of the] head, on the hands, on the pulse, on the legs--he measures the heart. For it is the case that its vessles are in the back of the head and in the pulse, and it is the case that it speaks to every vessel and every limb, revealing the measurement of his [...]--on the vessels of the head, of the back of his head, of his legs. [...] his heart in order to learn the knowledge that comes from it, for [it] reveals its measurement to one who ould learn what has happened there.

As for "who suffers from [...] his wound," it is to say his would is small [not wide] without gaping from one side to the other. 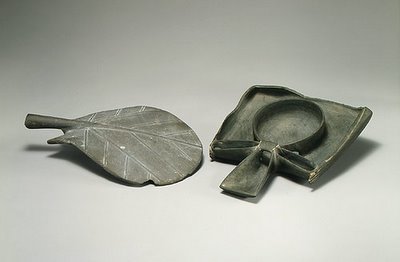 What's interesting about this passage is that it is one of the very earliest writings describing the cardiovascular system and apparently describing how to monitor the pulse as a means of monitoring the patient. It's not clear to me why the scribe chose to include this information for what in essence sounds like a relatively minor scalp laceration, but I can speculate. This is the very first case presented on the papyrus. Perhaps the scribe wanted to emphasize this information early, to be used for the 47 additional cases that were to follow as a general principle. It's hard to say, and the papyrus is rather fragmented around this case, hence the missing text.

What is most interesting about this case is that it suggests that the Egyptians understood the rudiments of how the cardiovascular system works. They appear to have understood that the heart was at the center of the cardiovascular system and that it pumped blood to the rest of the body ("to every vessel and every limb"). Of course, these ancient physicians had no idea what the purpose of pumping the blood to the rest of the body was or what the blood was carrying. Even so, they also appeared to have understood that monitoring the pulse would help them in the assessment of how badly injured the patient was. It is also important to remember that the process of mummification involved removing the internal organs, giving Egyptian physicians of this time period (1,600 B. C.) the opportunity to examine gross pathology of organs in a way that few civilizations would for more than 3,000 years. Although the heart was usually left in place during mummification, it would be difficult not to note the large tubular structures (arteries and veins) entering and proceeding from the heart.

And, indeed, there may have been signficant contact between embalmers and physicians, as indicated in Case 9, which describes a "forehead wound with skull fracture." The examination and treatment state:

Besides the rather strange use of ostrich eggs, an important comment is made in the explanation:

As for "a cloth of a physician's outfit," it is the strip of cloth that is used by the bandager.

And who is this bandager?

It's the embalmer, the professional whose charge it was to make mummies. This passage therefore suggests that there may have been contact and exchanging of knowledge between these two professional groups, suggesting the possibility of physicians learning from the removal of organs during the preparation of corpses for burial.

Despite all this knowledge, however, we should not forget that much of the treatments in ancient Egypt were based on magic. For example, before using the ostrich egg concoction, the papyrus instructs:

What is said as magic over this prescription: "The enemy in the wound has been driven off; the conspiracy in the blood has been made to tremble; the fulbure of every side has been given to the mouth of the effective goddess. This temple will not deterioriate; there is no crocodile or poison therein. For I am in the effective goddess's protection: Osiris's son is rescued."

For all the surprising level of knowledge about disease for such an ancient time, Egyptian physicians were primarily priests. Many of the treatments they used were based on magic and superstition. Even so, through observation, they managed to understand more than you might think.

Next week: Chest wounds. Or maybe neck injuries. (I'll decide when I get around to writing.) Also, note that I've acquired another book on medicine in ancient Egypt that relies on much more than the Edwin Smith papyrus and has some rather interesting passages on how Egyptians dealt with heart disease and problems with the GI tract.
Email Post