I hadn't been planning on posting anything today (I've been working--or procrastinating about working--on a grant all weekend), but then I changed my mind when I found out about this. Given yesterday's post, this also seemed rather appropriate, not to mention that it was a great excuse to pull myself away from the tedium of grantwriting for a little while.

Regulars around here know I'm a big fan of Doctor Who, so much so that I've managed to see most of the episodes of the new Doctor, courtesy of my mother, who happens to live close enough to the Canadian border to get the episodes by the CBC and was willing to record them and periodically send them to me. I have no idea why BBC American never broadcast the show, but it wouldn't have mattered anyway, because Cablevision doesn't carry BBC America around here. In any case, I really liked Christopher Eccleston's take on the Doctor and was sorry to see him go after only one season. I'm hoping the new Doctor is as good.

I've just learned, via Alun, that one of the classic villains, the Cybermen, are slated to return. The Cybermen were a race of cyborgs from the planet Mondas, who had developed the technology to replace their diseased and dying body parts and later bodies, leaving robotic bodies driven by humanoid brains, leaving creatures without emotion but with a desire to claim the Earth for their own. The costumes for the Cybermen were always among the cheesiest of any of the old Doctor Who characters, but, so compelling were they as villains, that somehow the cheapness of their costumes didn't usually bother me. Indeed, they were the featured villains in one of the best Doctor Who stories of all time, Earthshock, and also a rarity in that one of the Doctor's companions was actually killed off, which gave the episode an emotional resonance and depth usually not found in the series.

To give you an idea of the improvement, here are the old Cybermen as they appeared in Earthshock: 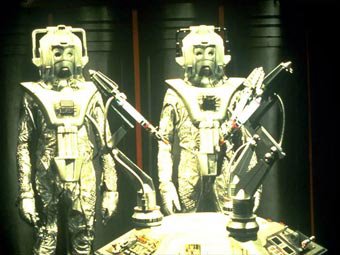 Believe it or not, they looked even more cheesy in earlier iterations.

And, now, here are the new, improved Cybermen:

Big improvement. Way cool. The costume no longer looks like the actor's wearing a tinfoil jumpsuit and a helmet. Given what the producers have done with the revival of the Doctor, I'll be very interested in seeing these new episodes.
Email Post