How to cut costs in my lab

I've been on a role the last couple of days. However, I must admit, I got a bit carried away with a couple of long screeds. So last night I took a break. Today I'll post something that I had originally written last week to be posted on Friday. The reason it was never posted is because it was pre-empted by my post about David Irving and my taking more time than I should have wasted slapping down Dean Esmay's ridiculous HIV denialism on Monday. On to lighter fare...

Last week, via Science and Politics, I think I might have found a desperately needed way to cut costs in my lab: The MacGyver Project: Genomic DNA Extraction and Gel Electrophoresis Experiments Using Everyday Materials. Such cost cutting measures are critical, because, despite getting my first NIH grant earlier this year, finances are still tight. Oh, they were fine this year, and you'd think I'd be be riding high in hog heaven (scientifically and budgetarily speaking), after finally having attained the Holy Grail of biomedical research funding: the NIH R01. Unfortunately, the lab isn't. First off, the NIH took 22% off the top of all new grants with the rather scary possibility of additional cuts to existing grants if the NIH budget takes a cut in the 2006 budget, as is a distinct possibility. Second, my other grant is due to expire in April, after which money will get much tighter. Third, the university mandates that salaries go up (regardless of employee merit) 4% a year, and the NIH has been consistently raising the mandated rates for postdocs and graduates students every year. In addition, the university has been steadily increasing the amount they charge for fringe benefits and taxes. When I first arrived 6 years ago, it was 26% of salary. Last year, it was 33%, and they plan on increasing it to 34% for 2006. Salaries and fringes keep going up, but the grant provides the same sum every year.

There are only two possible solutions (which may be used in combination, of course): Raise revenues (i. e., get another grant, something I'm working on); or cut expenses. Salaries are pretty much untouchable; so that just leaves supplies.

And that's where the MacGyver Project comes in.

For those of you not familiar with MacGyver, it was a TV show from the late 1980's in which the hero, MacGyver was able to solve problems and defeat his enemies through his cleverness and ability to improvise. His clever solution to problems using the materials at hand, such as using Rosary beads to focus sunlight and trigger a slingshot or using acetic acid and ammonia to produce a smoke screen, became known as MacGyverisms.

So, in the spirit of MacGyver, why waste all that money buying gel electrophoresis boxes at $250 a pop for what is basically a Plexiglass box with a couple of wires and plugs and a tray to run the gel in? What a rip-off! And why waste hundreds of dollars a month on various DNA purification kits, when much cheaper methods will do? I could totally see using Agar Agar obtained from an Asian grocery store (and, conveniently, there is a large such store a mere four miles or so away). Legos with Glad Press 'N' Seal to construct the gel tray? Genius! See the diagram: 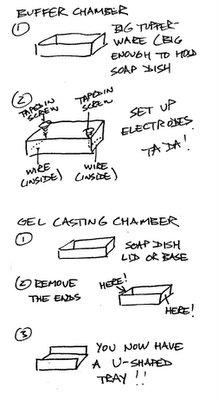 Unfortunately, we don't do genomic DNA extractions very often; so this probably wouldn't be much use. What I really need is a good MacGyver method to extract RNA for quantitative reverse transcriptase real time PCR. We do a lot of quantitative RT-PCR in our lab. A lot. One problem with the MacGyver method is that it would be hard to keep RNases from degrading the RNA. DNA is a lot hardier than RNA, which is easily degraded. It would also be nice to have a MacGyver protocol for the extraction of protein for Western blots and nuclear extracts for gel shift assays.

I suppose it would be too much to hope for a MacGyver protocol for cloning, plasmid isolation, and retroviral vector construction--or for the PCR reaction itself. For one thing, you can't do PCR with Taq polymerase or other thermostable DNA polymerases, and the only sort of MacGyver protocol I can think of would involve harvesting the thermophilic bacteria and somehow isolating the enzyme.

Still running a lab on the MacGyver concept sounds as though it would be rather fun. Unfortunately, it would not be practical.
Email Post