Once again, it's the first of the month. Regulars around here knows that the first of the month traditionally means the return of everyone's favorite colon health crusader, that six-foot guy whose job you really woundn't want to have, even if you view his job as just dressing up in a truly embarrassing costume to sell enemas for colon preparation before various endoscopic procedures--never mind if he really does what he looks like he could do. (And, yes, Orac has met him at the Fleets Pharmaceuticals booth at an annual meeting of the American college of Surgeons.)

Yes, once again, it's time to Ask EneMan:

I've heard about hyperbaric oxygen therapy. I'm told it's great for all sorts of things, including general health. Heck, the local station here even claims it's good for autism! I happen to have a cousin who's autistic. should I be talking to my aunt and uncle about this? What's the real scoop?--Signed, Heavily Oxygenated in Madison. 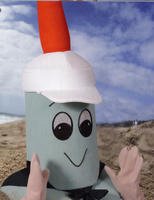 Oh, my. This is outside of my area. As you know, I mainly deal with colon-related health. However, for you, my crack team of researchers did a little digging. It's obvious to me that hyperbaric oxygen (HO) is one of those altie therapies that has actual medical uses (usually for a limited number of conditions) but gets coopted as supposedly being great for everything, even for warding off the aging process. Never mind that prolonged exposure to HO would be more likely to cause premature aging, not ward it off, given the increased free radicals it would cause. Maybe that's part of the reason why Michael Jackson looks the way he does.

First off, let's get one thing straight. There's absolutely no good scientific evidence that HO does any good for autism. None. Nada. Zip. The whole idea behind HO is to treat diseases for which decreased blood flow or a low oxygenation is major part of the pathophysiology and for which higher oxygen tension might reasonably be thought to help. This also includes conditions for which high oxygen tension can displace a specific toxin from a binding site, like CO bound to hemoglobin. That means that HO is useful for nonhealing wounds, decompression sickness, severe anaerobic bacterial infections, necrotizing fasciitis (the "flesh-eating" bacterial infection), or carbon monoxide poisoning. [Orac note: That's where I had experience with this therapy during my residency: in the treatment of burn patients suffering from CO poisoning.] There's also evidence that it can be helpful in increasing the efficacy of radiation therapy in certain cancers, but only for head and neck tumors.

It's only marginally scientifically plausible that HO would be good for autism. In fact, some evidence in the literature suggests that increased oxidative stress may have relevance to the pathophysiology autism. If that is actually true, then HO might potentially even be harmful to autistics. (Certainly the known possibility of neurotoxicity from HO should give any parent contemplating this therapy for autism pause.) However, there are also studies that suggest decreases in regional cerebral bloodflow in autistics, but the significance of these findings are unclear. Even if these results are consistent and confirmed, it does not necessarily follow that hyperbaric oxygen will do anything to reverse the pathophysiology. In any case, my team looked and looked and couldn't find one trial, one scientific paper, or one bit of convincing evidence that it does anything. Only testimonials. A PubMed search on "hyperbaric oxygen" and "autism" fails to turn up a single hit. They also couldn't find any evidence that HO can reduce the effects of aging, either. Sorry Michael.

Of course, that doesn't stop alties from expanding the number of conditions way beyond the acepted indications for HO to include conditions which there is at present no good evidence for its efficacy, such as cerebral palsy, stroke, multiple sclerosis, post-head injury syndromes, coronary artery disease, migraines, stroke, cancer, HIV, fibromyalgia, autism, and Crohn's disease (finally, a disease up my alley!), among others. For diseases for which preclinical data suggests that HO might help, HO can at best be considered experimental and should not be used outside of clinical trials. For diseases for which there is no such data, then it shouldn't even be considered. Of course, you will hear testimonials otherwise, but remember that testimonials generally exist to sell a product.

Does the above list sound familiar to you? It should. It's the same sort of list of diseases with unrelated pathophysiology that alties claim that chelation therapy, for instance, can treat. Indeed, as a general rule of thumb, it's a sign of dubious medicine at best and quackery at worst when you hear a practitioner claim that a single therapy has efficacy in treating a wide variety of diseases whose pathophysiologies are unrelated. You find exactly the same sort of list (albeit including a different, but overlapping, variety of diseases) touted by advocates of chelation therapy, which, if we are to believe its advocates, can treat heart disease, autism, cancer, hypertension, osteoporosis, skin ulcers, Alzheimer's disease, and many others.

Worse, hyperbaric oxygen is not without complications. The main complications are related to oxygen toxicity, and the two organs most affected are the lungs and the central nervous system. Any doctor who's taken care of ICU patients knows that 100% oxygen is toxic to the lungs, and that when positive end-expiratory pressure (PEEP) is added it's even more toxic. That's why we try very hard to get the inspired oxygen concentration below 50% as quickly as possible in our ventilated patients. Pulmonary oxygen toxicity can occur with as little as 16 hours of exposure. CNS toxicity in the form of convulsions is also possible. True, these complications are considerably less likely if exposure to high partial pressures of oxygen is relatively brief and transient, but they are still possible, given that most HO regimens require many repeat treatments. Why expose yourself to even relatively small risks for a therapy that isn't effective for the condition being treated?

And let's not forget that HO is rather expensive. It's generally $100-500 per treatment, and, as is the case for chelation therapy, many treatments are usually recommended. To me, this sounds like a lot of money for little or no benefit, except for a relatively limited number of diseases and conditions.

Gee. This is fun. I get bored only discussing colon health and debunking all the alties out there who like to purge their colons for no good reason. Maybe I should make a habit of this. In the meantime, it's November, which means that Thanksgiving will soon be here!

November 2005
And, as always, here is a list of all the past appearances of EneMan, for those of you new to the phenomenon: