My ears are bleeding

But only if you have as strong constitution and a high tolerance for bad music. It seems to be a weird right-wing mutant cross of Billy Joel's We Didn't Start the Fire, coupled with Cheap Trick-esque flourishes (I half expected to hear them screaming "We're all alright, we're all alright, we're all alright, we're all alright" the way Rick Nielsen and Robin Zander did in the the version of Surrender featured on At Budokan). Worse, it's all coupled to a truly annoying "anthemic" chorus consisting of three words, all executed by a band that sounds like a cross between Loverboy and a high school Green Day wannabe garage band with middling talent and even less originality. At first I thought that it had to be some sort of parody, but it doesn't seem to be. These guys seem as though they're playing it straight.

And the lyrics. Holy crap. On the other side of the political spectrum, you may recall that I lambasted the Stones' recent song Sweet Neo Con for some truly inane lyrics, but this one makes Sweet Neo Con look like The Clash's political masterworks Clampdown, The Guns of Brixton, or (White Man) In Hammersmith Palais. Geez, if you're going to try to write conservative political rock, at least get that cuddly reactionary heavy metal rocker and bow hunter Ted Nugent. True, the lyrics would then be even more inane (if that's possible), but at least the Motor City Madman knows how to write songs that really rock. Oh, and lose the Bush cheerleading. Bush is not a real conservative, anyway. Just look at the growth in federal spending and the budget deficit under his term thus far if you don't believe me.

The sad thing is, I'm guessing that this song will go into heavy rotation on Rush Limbaugh's and Sean Hannity's shows as lead-ins and lead-outs, if it hasn't already.

Speaking of The Clash, though, have I ever mentioned how much I like them? In fact, they would easily make my top five favorite bands ever, if not my top three or two. (Of course, my favorite performer remains David Bowie; so that's the only reason The Clash could never make number one.) One of my fondest concert memories was seeing The Clash live in Detroit in the summer of 1982 at the Grand Circus Theater, where I got to experience why they were billed at the time as "the only band that matters." We had fifth row seats, and that concert ranks as one of the best, most intense shows I've ever seen. Near the end of the show, the roadies lost control of the stage, and a number of fans got up on the stage and started dancing, stage diving, and trying to sing with Joe and Mick. As fast as the roadies tossed them back into the mosh pit, new ones would appear. it was wild. (I stayed safely back several rows, preferring to avoid injury.) The only experience that could have been better would have been to have seen them in 1979 when they first toured America or (even better) in 1977 in the U.K. when they first broke (which, unfortunately, was before I discovered the joys of punk rock).

That's the reason why, when I saw the results of this silly little Internet quiz that I couldn't resist taking, I had to post it, even if there are a few who think it's a waste of time when I do these things (hopefully the commentary will make up for it):

Joe Strummer... you've been through the cleansing fire of punk, only to pick up a few venereal diseases along the way. You're more of an optimist when it comes to fucked-up genius. But you can write wicked-deadly riffs and lyrics.

Which fucked-up genius composer are you?
brought
to you by Quizilla
Excellent!

And Joe continued to make some top-notch music after The Clash broke up, both on his own, with the Pogues, and later with the Mescaleros. That's why it was a real shame when he died suddenly three years ago at the much too young age of 50.

You know, now that I think of it, even mentioning The Clash in the same post as these "Right Brothers" is an insult to the memory of Joe Strummer.

Forgive me, Joe, wherever you are. 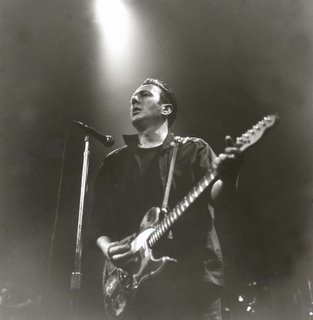