Rescued from the streets of Chicago!

My wife and I were a little worried.

A couple of weeks ago, our friend's boyfriend found a little Chihuahua wandering on the streets of Chicago. The poor guy was fairly old and apparently a stray. Canvassing the neighborhood failed to find the owner. Our friend didn't think she could keep him because of her cat, and her boyfriend routinely worked 12-15 hour days. It seemed that this little guy might have to be taken to the shelter, where, given his age, it was highly unlikely that anyone would adopt him.

Well, we're worried no more. I'm pleased to report that this little guy has found a home with his rescuer and has become the de facto mascot at the auction house where he works (where the boss apparently doesn't mind his being around). And here the little guy is, posing in the studio where as part of his job at the auction hous his rescuer takes pictures of various pieces of furniture for sale: 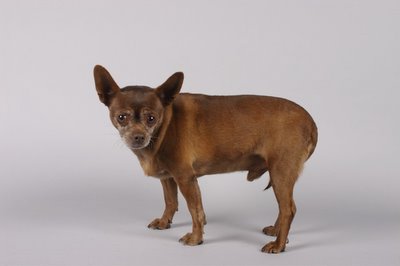