60th years ago today: The flag-raising at Iwo Jima 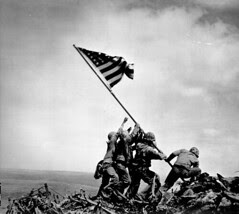 Sixty years ago today, one of the most famous events in the history of World War II occurred, an event that created an image that will resonate forever. Those who have been regular readers know that I have a strong interest in World War II, the Holocaust, and debunking Holocaust denial. However, thus far, you may have gotten the impression that my only interest was the European Theater. In fact, some of the bloodiest fighting of the war occurred in the Pacific Theater. In the early years of the war, before significant numbers of U.S. troops reached England and before significant military action was possible against Nazi Germany, the Pacific was where the worst fighting occurred. In the dark days of early 1942, U.S. forces suffered defeat after defeat before the seemingly relentless advance of the Japanese, until the U.S. Navy handed the Japanese Navy its first crushing defeat at Midway Island in June 1942. After that, nearly three years of brutal "island-hopping" combat finally brought the U.S. to the very homeland of Japan.

Iwo Jima was only 650 miles from Tokyo. Its importance to the U.S. was halfway between the bomber bases of the Marianas and Japan. Although the U.S. had long-range bombers that could strike Japanese soil, as was the case in the European Theater until 1944, they did not have fighter escorts that could accompany them all the way, leading to the bombers' vulnerability to fighter cover. The U. S. wanted Iwo Jima as a fighter base and an emergency landing site for damaged bombers. The Japanese wanted to hold it because it was part of the Japanese homeland and no foreign army had ever conquered any part of the Japanese homeland.

The Japanese defense strategy was simple and consistent with their code of Bushido: No Japanese survivors and each Japanese soldier was to kill 10 Americans before being killed himself. They dug 1,500 rooms into the solid rock of the island, all connected by 16 miles of tunnels in solid rock. Before the invasion, General Kuribayashi, who was in charge of the defenses of Iwo Jima, had been told "if America's casualties are high enough, Washington will think twice before launching an another invasion against Japanese territory." Kuribayashi designed his defense accordingly. 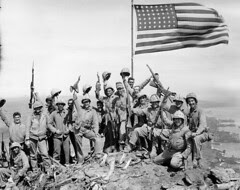 On the morning of February 19, 1945, the Navy's big guns opened fire, and, after several hours of bombardment, over 70,000 Marines went ashore under withering fire from the hidden Japanese over the next two days. For 36 days, Iwo Jima became the most densely populated battlefield on Earth, with roughly 100,000 American and Japanese soldiers on an island half the size of Manhattan.

Mt. Suribachi, a 550 foot volcanic cone on the island's southern tip, was the key, as it afforded the island's defenders a panoramic view of the entire island from which to direct fire. After four days of bloody fighting, the men of Easy Company had managed to reach the summit of Mt. Suribachi. There, they raised an American flag. Photographer Joe Rosenthal was on hand. It is actually the second flag raising that was immortalized in the photo at the top of this post. The first flag was a smaller flag and was too small to be seen by the men below. Battalion commander, Lieutenant Colonel Chandler W. Johnson sent a four-man patrol up with a larger flag to be raised. The stories of the men who raised the flag can be found here.

Unfortunately, although the troops were thrilled by this symbol, the battle for Iwo Jima was far from over. Three more weeks of combat awaited, and the island wasn't secured until March 26. Casualties were high, with some units taking 75% casualties. Overall, there were nearly 26,000 U.S. casualties (over one in three), with over 6,800 dead. Approximately 22,000 Japanese died. Approximately 1/3 of all Marines killed in action in World War II died at Iwo Jima, making it the single most costly battle in Marine Corps history.

So, given that, in my occasional discussions of World War II on this blog, I seem to pay inordinate interest to Europe and the Holocaust, I do not forget that the War in the Pacific was just as horrific and required just as much to win. I also take this day and other anniversaries of major events in the Pacific War to remember that my late uncle was a Marine corpsman in the Pacific late in the war. I still have his Navy Corpsman manual, which sits on a shelf in my office. It is one of my most prized possessions.
Email Post