Your monthly dose of EneMan

If it's February, it must be EneMan, this time in Canada, fresh from the pages of the 2005 EneMonths Calendar: 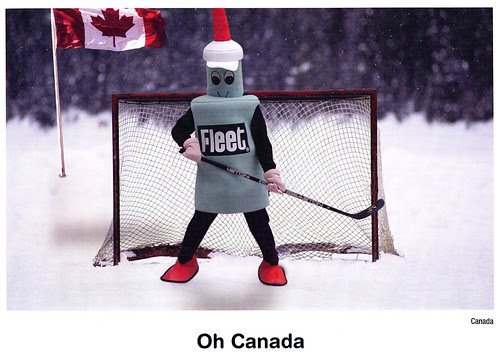 Don't worry. I realize that the last few days seem like nothing but silly Internet tests and EneMan here on Respectful Insolence. I plan on getting back to my usual meditations on medicine, science, and history later this week. Even I can't do EneMan bits and silly web tests forever; EneMan may amuse the hell out of me, but there's only so much anyone can take. Sometimes I wish I had the self-restraint that Dr. Hildreth (a.k.a. The Cheerful Oncologist) has. He only posts when he has fascinating things to say. (And on the rare occasions when he does occasionally feel the need to post filler, he posts wise and pithy quotes from that great father of modern medicine, Sir William Osler, rather than pictures of EneMan. Ah, well, perhaps it's the difference between the surgical perspective and the medical perspective. No, more likely, it's merely the difference between a classy guy like Dr. Hildreth and myself...)

It's just that, sadly, for the first time since I started this blog nearly two months ago, my day job has actually started getting in the way of blogging. I knew this day would come one day. Also, I've had a bit of a hard time figuring out how to followup my last huge post on Holocaust denial. So, yes, I've been treading water a little bit. I'm sure it happens to all blogs, even the big guys. It just hasn't happened to me before (but then this blog has only been around less than two months). Fortunately, this brief drought is not due to a lack of ideas for posts but rather to a lack of time to write about those ideas. So, instead I do quicky posts and posts like this. The drought will definitely end soon. I have a few things in the pipeline (written but still needing a lot of tweaking, half-written, half-written, and barely started). Day job permitting, they will appear here over the next week or two. They include a followup (or even perhaps two) to my well-received post on cancer denial, an article about the the 60th anniversary of the Dresden bombing, a little disagreement between blogs about chiropracty (perhaps to use for a future edition of The Skeptics' Circle), perhaps some musings on religion, and the usual skeptical look at alternative medicine--plus whatever else I happen to think of. I also have a whole boatload of ideas that presently exist only in a list as titles of future posts. So, never fear, I won't be running out of things to say anytime soon (if only I can find the time to say them well).

Damn the need to make a living, take care of patients, and oversee the progress of my lab! Ah, well, the great thing about blogging is that there's always tomorrow...