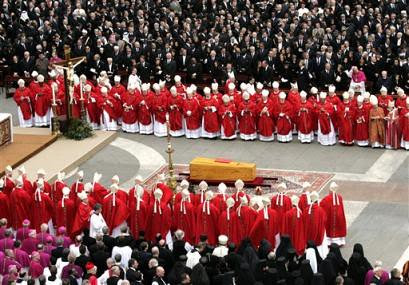 Pope John Paul II's funeral was still going on as I got up this morning to get ready for work. Even though I'm not the Catholic I once was many years ago, his death still saddens me, although in some ways it was a relief, given how frail and ill he had become after having been so athletic and energetic, planting the seeds for the Solidarity movement in his native Poland, hastening the fall of the Soviet Union, and traveling the world. He was elevated to Pope when I was in high school, and I can still remember the surprise that accompanied the election of the first Polish Pope and the first non-Italian Pope in 400 years, a source of great pride among Polish-Americans like myself. For many Catholics, he is the only Pope they have ever known. Although he was conservative on many issues, he was not always loved by political conservatives. They liked his staunch opposition to abortion, but his opposition to war and the death penalty rankled. The scientist in me also can't help but point out that John Paul also stated around 10 years ago that evolution was not incompatible with Christian doctrine. A nice summary of the paradox of John Paul's reign is here. He will be a hard act to follow.

Farewell, John Paul II. You will be missed.
Email Post