One reason I miss Chicago

I don't know if I've ever mentioned it here before, but I used to live in Chicago.

I love that city. In fact, it was my favorite place that I've ever lived. When work brought me east six years ago, it was really hard to leave Chicago, even though I had lived there only three years. I had developed an affinity for the city and our neighborhood in Lincoln Park near DePaul University, as well as our frequent haunts in Wicker Park, Bucktown, and downtown. I loved going to a Cubs game on a summer afternoon. It's arguably the purest baseball experience there is anywhere, sitting back, drinking an overpriced beer, and watching a game on a sunny summer afternoon. I loved the lakefront, and, well, just the entire vibe of the city. (OK, the winters were rough, but I could deal with them; and navigating the Kennedy Expressway at rush hour is one of the most frustrating driving experiences anywhere, period, but I put up with it.) In any case, Chicago is different than the big cities on the East Coast (it's a lot friendlier, for one thing); maybe it is just my Midwestern upbringing that made Chicago such a good fit for me compared to cities like New York, Philadelphia, Baltimore, or Washington. Fortunately, I still have family there to bring me back. Also, there are fairly frequent medical and surgical meetings there that I like to attend, and I rarely miss a chance to go back, if even for a couple of days. Even so, I don't get back to Chicago nearly as often as I would like.

Yesterday, my sister, who lives near a church in a heavily Polish neighborhood in Chicago, told me that she was working at home one day last week, when she was startled by the roar of many motorcycles. She looked out the window, and what did she see? A large contingent from a Polish biker club arriving at the nearby Catholic church to pay their last respects to Pope John Paul II. How cool is that? Fortunately, she had her digital camera and knew how to use it. I can't think of any place else in the country, if not the world, where you would be likely to see something like this. From the pictures, it appears to be the Legacy Polish Motorcycle Club. 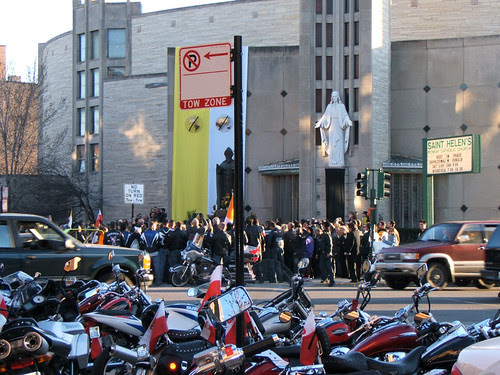 The bikers gather. Note the statue of Pope John Paul II in front of the church on the left. 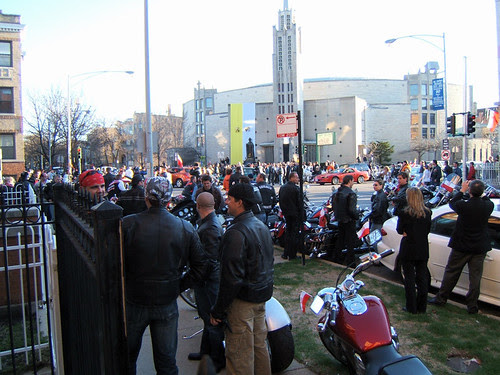 More bikers. Note the many Polish flags and flags with the Polish national emblem (the Polish Eagle) 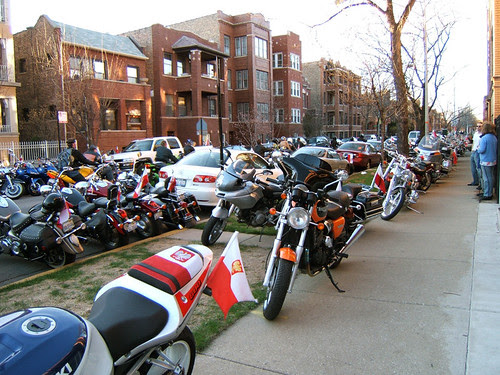 The motorcyles are taking up the entire block! 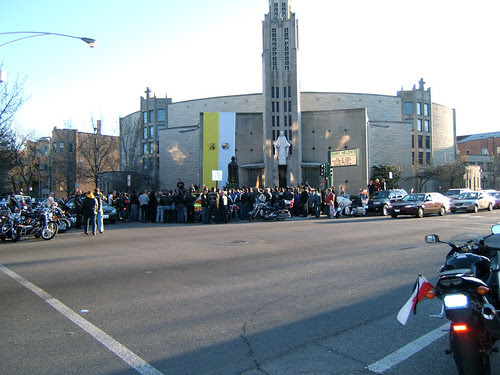 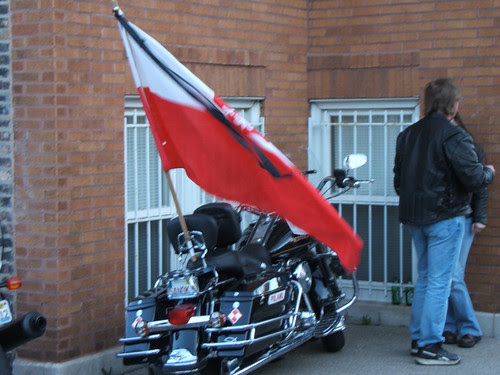 A prominent Polish flag with the added Polish Eagle on the motorcycle, of course! 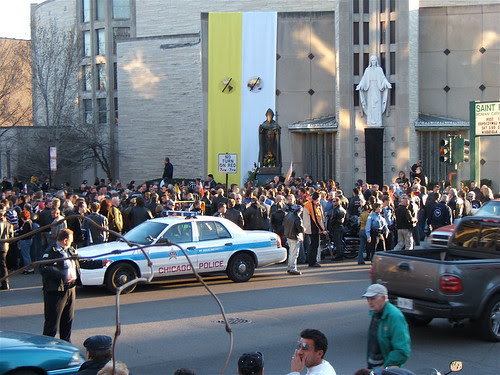 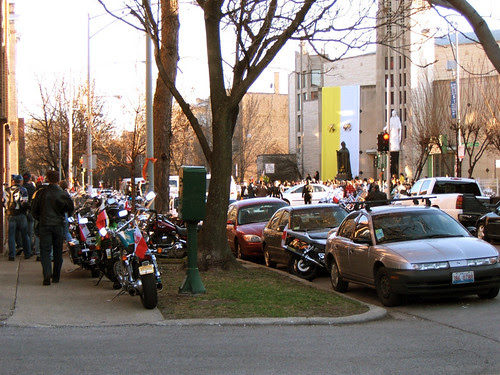 The last view
Damn, I'm missing Chicago right now. No, not because I'd like to have a couple hundred Polish bikers firing up their motorcycles outside my window on their way to pay their last respects to the late Pope, but rather because Chicago is the sort of place where a couple hundred Polish bikers would gather at a church to pay their respects to the late Pope. If you don't understand what I'm talking about, I don't know if I can explain it any better than that. The suburbs where I live now are just plain boring in comparison.

By the way, if you're ever in Chicago, be sure to check out my favorite neighborhood Italian restaurant, Club Lucky. It's in Bucktown, away from the tourist traps, and serves up some great Italian food.

Thanks to my sister for the pictures...
Email Post