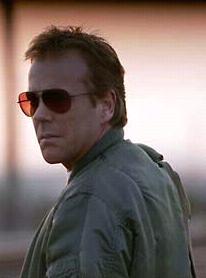 Anyone who was here last year at this time knows that I'm a 24 junkie. For those who aren't familiar with it, 24 is a show that follows a single 24-hour period in the life of an anti-terrorist agent, Jack Bauer (played by Kiefer Sutherland). Each episode represents an hour of that day presented in "real time" (complete with the occasional ticking clock in the corner to remind the viewer what time it is and with split screen montages leading into each commercial break to remind the viewer what's happening simultaneously). It's basically a thrill-ride, with nearly every episode ending on with a cliffhanger.

Yes, I realize that it requires a willing suspension of disbelief to accept that Jack Bauer could do so many things, survive so much physical abuse, and go so many places in a single 24 hour period. Yes, there are a number of inconsistencies and goofs on the show that challenge belief. (For example, Jack never seems to get caught in a typical L.A.-style traffic jam; an entire hour long episode--or two--consisting of Jack going nowhere on the Santa Monica or Harbor Freeway wouldn't make for very interesting television.) Yes, I realize that the show tends to take a rather too accepting view of the legitimacy of torture as a means of extracting information from miscreants and all-too-often seems to view the Bill of Rights merely as a pesky impediment to Jack's ability to do what he does best, namely kicking terrorist butt. As a libertarian-leaning moderate conservative, that "ends justify the means" philosophy that rears its ugly head periodically should be enough to make me hate this show.

And yet the show is highly addictive once you watch the first three or four episodes and get hooked. It's a fantasy world where an unbelievably competent, cunning, and ruthless agent is protecting us all from horrible people bent on our destruction, no matter what or who gets in his way, even his own government. This year, the producers have added an interesting twist. Because of his role in a botched assault on the Chinese Embassy to rescue a key informant, Jack has been forced to stage his own death. Everyone, including the weasely and indecisive President (who was the Vice President but was forced to assume the Presidency when Air Force One was shot down and the President critically injured), thinks he is dead, and at the end of last season he was seen walking off alone like The Man With No Name or a samurai warrior. It's an interesting shake-up to the formula that has developed over the last four seasons, and it will be interesting to see how the characters react to the inevitable discovery that Jack is not room temperature. You have to wonder whether the writers can pull it off, but, given their past track record, I wouldn't bet against them.

Also, this year supposedly one of the major characters is going to die early in the first episode. (My guess is that it's got to be former President David Palmer, given that Dennis Haysbert has a new TV series, but who knows?) This has led some blogs to start Season 5 Death Pools.

In any case, you know where I'll be tonight and tomorrow night between 8 and 10 PM....

(After my wandering far afield from medicine, science, etc., it will be back to more normal topics next week, as promised yesterday...)
Email Post