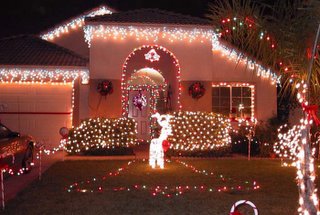 Every neighborhood has one, occasionally more than one. We have one too.

Yes, it's the neighbor who won't take down his Christmas lights. Here it is, mid-January, and he hasn't taken down his lights and lawn decorations yet (and they aren't nearly as attractive as the ones pictured above--rather, they are quite tacky). It wouldn't be so bad if it was just laziness and if he left them turned off, but every night this guy turns the lights on full blast, as if it were December 23. Last year, it was well into February before this guy finally took his decorations down. This year, I have a blog, and I plan on keeping a record. I want to see if he matches or exceeds last year's record.

This guy should have taken his lights down last weekend, but I'll cut him some slack. Instead of making today Day #5, I'll make today Day #1 of the countdown: Take your damned lights down!