You know, if Pat Robertson didn't exist, skeptical bloggers would probably have to invent him. He provides such a wealth of utter lunacy and bizarre statements on such a regular basis as to provide blog fodder for a million skeptical bloggers. He's a veritable cornucopia of the worst illogic to be found in fundamentalists, whether it be his pronouncement that the citizens of Dover had just "voted God out of their city" for having voted out the school board that had tried to introduce the teaching of intelligent design creationism in their science classrooms (and therefore shouldn't count on God's help if there is a disaster) or his recommendation that Dover citizens "call Charles Darwin" if they have problems and need help. When it comes to sheer, bat-shit crazy, fundamentalist wingnuttery, Pat rarely disappoints, and yesterday wasn't any different.

What's Pat's most recent craziness? He's has said that Sharon's stroke was God's punishment for his "dividing His land":

I have said last year that Israel was entering into the most dangerous period of its entire existence as a nation. That is intensifying this year with the loss of Sharon. Sharon was personally a very likeable person. I am sad to see him in this condition. But I think we need to look at the Bible and the Book of Joel. The prophet Joel makes it very clear that God has enmity against those who, quote, "divide my land." God considers this land to be his. You read the Bible, he says, "This is my land." And for any prime minister of Israel who decides he going carve it up and give it away, God says, "No. This is mine." And the same thing -- I had a wonderful meeting with Yitzhak Rabin in 1974. He was tragically assassinated, and it was terrible thing that happened, but nevertheless, he was dead. And now Ariel Sharon, who was again a very likeable person, a delightful person to be with. I prayed with him personally. But here he is at the point of death. He was dividing God's land, and I would say woe unto any prime minister of Israel who takes a similar course to appease the EU, the United Nations or United States of America. God said, "This land belongs to me, you better leave it alone."

So let me get this straight. Sharon makes war for decades. He's known as a serious security hawk and is utterly relentless in fighting Israel's enemies for almost his entire career, using sometimes brutal methods that led him to become a controversial figure, even in his own nation. Now, in the twilight of his life, Sharon has become more moderate and has decided that, after decades of war, it is finally time to seek peace with his enemies, and God smites him down? Is this really the God that Pat Robertson worships? 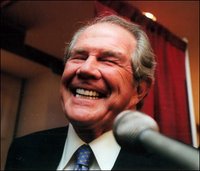 Maybe Robertson is worried that "dividing Israel" might interfere with his plan to build a Biblical theme park in Israel by the Sea of Galilee, where Jesus was thought to have fed 5,000 with five loaves and two fish. As planned, it will feature a garden and nature park, an auditorium, a Holy Land exhibition, outdoor amphitheatres, information centre and a media studio. The land on which this park is to be built on land that was Syrian until the 1967 war, and, along with the Golan Heights, Syria still wants it back. If Sharon was willing to negotiate land for piece with the Palestinians, perhaps he would have done the same with Syria.

More likely, however, Robertson's objection derives from the believe that Fundamentalist Christians have that, in order for Jesus to return again, two preconditions are Jewish control of the land of Israel and the conversion of the Jews to Christianity.

Indeed, that's exactly how some some Israeli Jews view the proposed theme park:

Yossi Sarid, a former government minister and member of the Knesset, said he was wary of the friendship of the American Christian right and projects such as the Galilee centre. He said: "I am not enthusiastic about this cooperation because I have no desire to be cannon fodder for the evangelists.

"As a Jew, they believe I have to vanish before Jesus can make his second appearance. As I have no plans to convert, as an Israeli and a Jew, I find this a provocation. There is something sinister about their embrace."

Indeed there is. It's hard not to think that Pat Robertson and his ilk are somehow trying to "speed along" the coming of the Apocalypse and thus the final Judgment and return of Jesus, first by supporting an "undivided" Biblical Israel, then by planting theme parks in Israel in an effort to convert Jews to Christianity, their promise not to proselytize Jews notwithstanding.