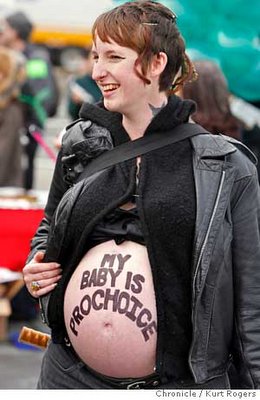 I'm probably going to end up regretting posting this, but the above picture irritated me.

No, it didn't irritate me because the woman is demonstrating in support of abortion rights. Rather, the photo offended my sense of skepticism and critical thinking. It shouldn't matter what one's position is in the abortion debate to see that, on a logical basis alone, the above body painting, seen at one of the many marches on the anniversary of Roe v. Wade yesterday, is pretty illogical and indeed borders on downright idiotic.

Think about it a second.

If a fetus could think and have an opinion on abortion, is it logical or even reasonable to think that it would support a position that might potentially result in its own destruction? That seems to be the implication of the body painted message above.

Orac has now had himself placed in a special asbestos case. At least he wasn't as snarky about this photo as Dave was, although he was definitely tempted.
Email Post