And on the seventh day, the Hitler zombie rested (I hope) 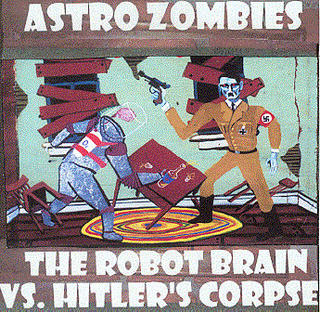 The Hitler zombie's been a busy undead Führer the last three weeks (1, 2, 3, 4), and it's time (I hope) for him to go back into his coffin for a while, assuming the politicians and pundits so enamored of letting him out don't open the casket again. But, before I nail the lid shut on this undead eater of politicians' brains, I thought it was worth briefly answering one question that was asked in the comments of his last appearance:

But again I ask, to whom should he [Durbin] compare the treatment of prisoners at Guantanamo?

A fair question, and here's my answer:

A more appropriate comparison for the abuses at Gitmo would be "banana republic" authoritarian regimes like Manuel Noriega's, Fidel Castro's, or regimes like those of our erstwhile "allies" Pakistan or Egypt. Even these would still be somewhat overblown comparisons, but they wouldn't be nearly as ridiculously overblown.

Now that I've answered that, something else came to mind. The Hitler zombie is such a great device, that I'm sure I'll have reason to open the coffin and let him out again from time to time. Given that, I thought it would be cool to have an actual picture of a Hitler zombie to use as a graphic. I did a Google picture search, but all I could find were the pictures I've posted here. I rather like the Robot Brain vs. Hitler's Corpse graphic, but I don't think the zombie Hitler should be carrying a gun. His weapon is his ability to eat the brains of politicians and pundits; he needs no other.

So, if anyone knows where any good Hitler zombie pictures can be found (or pictures that could be easily altered to become Hitler zombie pictures), let me know. Who knows? If I get a chance, I may even have a little fun with Photoshop, although I'm not that talented with it. Of course, if anyone out there is really creative, I would be more than grateful to see your creation.

For now, though, it's time for the Hitler zombie to go back to his unnatural sleep for a while (hopefully a long while). There he will stay in his underground resting place. There's no doubt that he will return again someday, but for now, he is satiated. Until someone like Charlie Rangel, Rick Santorum, Dick Durbin, or anyone else revives him, let's be grateful for a break from the hyperbole. But, believe me, the shambling, rotting corpse of the deceased Führer will be ready and waiting--as always.

ADDENDUM: Argh! Josh Rosenau has pointed out another victim of the brain-eating Hitler zombie, Rachael Lea Hunter, a candidate for Supreme Court Justice in North Carolina. Apparently the undead Führer somehow managed to grab a little snack on the side while I wasn't looking. I'll have to keep a closer eye on the sneaky little bastard!
Email Post