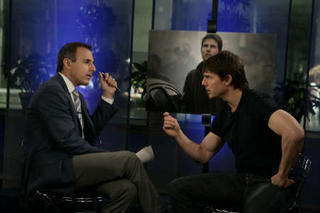 I think that Scientology has finally affected Cruise's brain, perhaps irreparably. I really do. Want evidence? Read this hilarious transcript of Tom Cruise's interview with Matt Lauer last week. He calls psychiatry a "pseudoscience" and tries to justify his statement that Brooke Shields shouldn't have used antidepressants to treat her postpartum depression. Repeatedly claiming that he "knows the history of psychiatry," Cruise fallaciously concludes that, just because there have been abuses in the history of psychiatry that it is all bad. Here is one amusing excerpt:

TOM CRUISE: But what happens, the antidepressant, all it does is mask the problem. There's ways of vitamins and through exercise and various things. I'm not saying that that isn't real. That's not what I'm saying. That's an alteration of what-- what I'm saying. I'm saying that drugs aren't the answer, these drugs are very dangerous. They're mind-altering, anti-psychotic drugs. And there are ways of doing it without that so that we don't end up in a brave new world. // the thing that I'm saying about Brooke is that there's misinformation, okay. And she doesn't understand the history of psychiatry. She-- she doesn't understand in the same way that you don't understand it, Matt.

MATT LAUER: But a little bit what you're saying Tom is, you say you want people to do well. But you want them do to well by taking the road that you approve of, as opposed to a road that may work for them.

MATT LAUER: Well, if antidepressants work for Brooke Shields, why isn't that okay?

I just wish Lauer had asked Cruise to justify the utterly ridiculous pseudoscience behind Scientology, such as the "E-meter" that its adherents use to diagnose the "mental and spiritual condition" of the test subject. Naturally, the conclusion is always that the subject needs more "auditing" (Scientology's "diagnosis and therapy" for such problems) at a cost of thousands of dollars. And this ridiculous pseudoscience is not without other costs. For example, there is the case of Jeremy Perkins, a schizophrenic many of whose family were members of the Church of Scientology and who was left untreated. He ended up stabbing his mother 77 times. Apparently Tom's ability to recognize pseudoscience when he sees it isn't quite as fine-tuned as he seems to think it is.

Of course, The Onion, as usual, got it just right a few years back when writing about John Travolta's Scientology beliefs...
Email Post