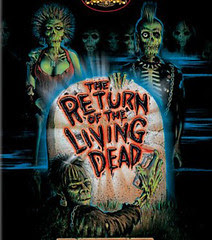 Here's more evidence that Columbine and other fears have unhinged some people's brains.

An 18-year-old high school student in Kentucky named William Poole has been charged with "making terrorist threats" for having written in his private journal a story in which zombies overrun a high school. He did not name the school, anyone who goes to or works at his high school, or anyone in Clark County. It appears his nosy grandparents read his journal and turned him in.

Even so, police say the nature of the story makes it a felony. "Anytime you make any threat or possess matter involving a school or function it's a felony in the state of Kentucky," said Winchester Police detective Steven Caudill.

Let's get this straight. Any matter involving a school or function is a felony? Someone pointed out that, by that criterion, keeping your high school yearbook could be considered a felony. It's possible that Mr. Caudill misspoke, but it's also clear that he's brain dead, and so is are the prosecutors and judge:

On Thursday, a judge raised Poole's bond from one to five thousand dollars after prosecutors requested it, citing the seriousness of the charge.

Thank heaven I don't live in Clark County in Kentucky. Perhaps we should send Mr. Caudill and this judge The Zombie Survival Guide. It might actually educate him. 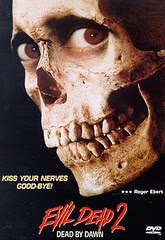 Also, thank heaven I went through high school in the late 1970's, rather than now. If I were a high school student today and behaved today the way I did then, no doubt some ignorant paranoid twit like Mr. Caudill would want to lock me up. Why? Well, for one thing, I used to play a lot of Dungeons & Dragons, and we all used to revel in slaughtering (imaginarily speaking, of course) huge numbers of imaginary enemies. (In fact, during my senior year, my friends and I used to play D & D at lunch or on breaks at school--and I went to a Catholic high school. The priests never stopped us or even seemed the least bit concerned.) For another thing, I used to decorate my notebooks with amateurish drawings of Conan-like warriors wielding huge swords and battling various monsters, as well as one rather disturbing image that represented my concept of what Sauron looked like. In other words, I was a fairly typical geeky teenaged male who read a lot of science fiction and and fantasy, collected comics like a fiend, and played games that let my imagination go wild. Despite all that (or perhaps because of it), I turned out OK, having made it through graduate school and medical school and now taking care of patients while running a fairly productive cancer research laboratory. Personally, I attribute a lot of my imagination and writing skills to my geeky past, but schools don't seem to see it that way these days. I really pity kids in high school now who are like I was then. Not only do they have to deal with the usual problems of being a nerd or geek or whatever they're calling it these days, but now they have to worry that the school administration will think they are early stage mass murderers.

More on this here, here and here.

UPDATE: Based on OutEast's comment (and the fact that my B.S./urban legend detector, like OutEast's, had indeed twitched a little bit about this story--although apparently not strongly enough), I did a little more digging between meetings this morning. As mentioned by OutEast, blogger a.r. reports an anonymous source who claims Poole had been in trouble before and that the story had nothing to do with zombies, but rather contained a plan to take over the school, with weapons lists, recruits, and instructions how to breach security. Normally, I would take an "anonymous source" about as seriously as the aforementioned story about zombies, but another story in a local paper reports the story in this light as well. One thing I've noticed in looking at this again is that there appears to be at least one person, maybe more, commenting anonymously on blogs defending the school, for example in a.r.'s post and also here. (Perhaps one of them will find my blog and actually post a comment here with verifiable information. I would be most grateful for that.) Others have pointed out the other side of the story.

In my defense, I did do a couple Google searches on this before posting (probably because of the light tingling of my B.S. antennae), and was unable to find much more. However, now, after refining my search terms, I was able to find additional information. Also, it was late at night when I wrote this. I didn't read all the comments from the bloggers' posts I referenced, which, if I had seen them, might have set off my B.S. detector a little more strongly. Oh, well. At least I always try to clear things up when it is pointed out to me that I might have screwed up.

BOTTOM LINE (for now): This story is very likely more complex than I led you to believe. Deep down, I had suspected that it might be, but perhaps my memories of high school geekiness led me to jump too rapidly to conclusions. (Geez, this time Nate really will take away my super-secret Skeptics' Circle decoder ring, as I feared in the past--based on a previous incident of insufficient skepticism--and never let me host again...) On the other hand, if the other version of the story does turn out to be correct, I can't understand how this kid's lawyer would have coached him to or let him make these sorts of statements to the media (or even let the kid speak to the media in the first place before the court hearing). Such statements could only hurt Poole in court. It's possible that the kid talked to the media without consulting his lawyer, but I tend to doubt it, given that he was in the juvenile detention center at the time of the interview and would have had to go through channels to receive any phone calls or visits from reporters. I also can't understand why the police wouldn't have simply issued a brief statement that gave a little more information about what was in the story, not enough to undermine their case but rather enough to refute Poole's claims.

I'm also very puzzled by the lack of followup on this story by the local media. I know that if something like this happened near where I live, it'd be all over the news for days, even though, being near a large city, there would be plenty of other news to crowd it out. In fact, I'm puzzled that this isn't a national story, as it's just the sort of story that usually gets picked up by the national press, at least since Columbine. Yet, here, in this small town in Kentucky, where presumably life is more tranquil and stuff like this presumably rarely happens, there doesn't appear to be a single followup story after the kid's interview--even though the arrest happened a week ago. (At least, I can't find any legitimate news stories more recent than the one I originally cited.) Such a lack of followup sometimes indicates that the story may, in fact, be an urban legend, but I don't think so in this case. The news accounts appear to be too specific and too easy to verify through the police and courts. I also searched Snopes.com and couldn't find anything about it.

It may very well be (as it often is in these cases) that the true story is somewhere between the two competing stories. Whether it will turn out to be closer to the police account or Mr. Poole's account, however, I have no idea at this time. Perhaps the police did over-react to a story, or perhaps this kid really did make specific threats. I'm beginning to suspect that the zombie story might be a red herring. Poole stated that the police had reacted to "one of my stories" and then mentioned the zombie story. Perhaps there were other stories in his notebook, and it was to one of those that the grandparents and police reacted.

I guess all I can do is to promise to try to keep an eye on this story as it develops. When the kid is arraigned in court, the prosecutor will have to produce some sort evidence to justify trial. Sooner or later, the entire text of the story will have to be made public. The truth will out, and we'll find out if this really is a case of an overzealous police department and prosecutor overreacting to a kid's flights of fantasy (as Poole claims) or if Poole really is a Dylan Klebold in the making, as the prosecutors seem to be claiming.

Finally, I stand by my criticism of Mr. Caudill, for saying what he did. By the criteria he listed, writing a story about school (or, as some have pointed out, having a school yearbook might be grounds for being charged). If that's not what he meant to say, he should retract it now. If that is what he meant to say, he is indeed a moron. I also still think that "zero tolerance" = "zero common sense," as there plenty of other examples that are much better documented (for example, the recent incident of a 6-year-old girl busted by a teacher for giving her friend a plastic bag full of dirt and clovers because the poor girl's idiotic teacher couldn't tell the difference between dirt and marijuana), even if this particular incident ultimately turns out to be a bad example.

I found this. Dated Februrary 25, it states:

A junior at George Rogers Clark High School has been charged with terroristic threatening, a felony, after notes outlining possible acts of violence against students, teachers and security guards were found. No direct threats were made against named people, Winchester police Detective Steven Caudill said. William Poole, 18, of 426 East Broadway was being held on $5,000 bond yesterdayy at the Clark County jail. Caudill said Poole's family was cooperating with police. Principal John Atkins said he received a dozen or so calls from concerned parents yesterday.