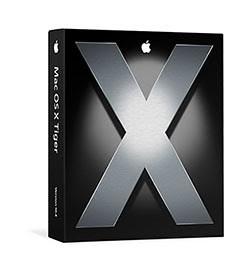 Mac geek that I am, I naturally got copies of the latest update to the Mac OS, OS X 10.4 "Tiger" for my lab, office, and home computers. Over the weekend, I installed Tiger on three of our computers. Now that I've had a chance to play with it for a week, I thought that I'd give my impression. Never mind that St. Nate beat me to it a few days ago (along with scores of other bloggers, no doubt); given that I've been a Mac user for at least 16 years, I can't refrain from putting my two cents in.

First, Tiger is evolutionary, not revolutionary, at least as far as the interface is concerned. OS X 10.3 ("Panther"--and, no, I don't know why Apple names its operating system releases after big cats) was a far bigger change compared to 10.2 than 10.4 is compared to 10.3. Tiger's interface is more or less the same as before. The graphics seem a bit cleaner, with the windows and fonts looking sharper, but all the same elements are there, including the sidebar. The System Preferences window is quite similar to that of OS X 10.3, but more logically arranged into groups, with a nice "browser-like" interface. I haven't seen objective testing yet, but one much appreciated change is that the OS "feels" snappier and more responsive. Even on my four-year-old original Titanium PowerBook (which, unfortunately, I'm presently forced to use as my main axe until my regular computer gets back from the shop) feels less sluggish. Indeed, it feels usable now, whereas before it was annoyingly sluggish for even basic operations. I don't know if this is just my perception or wishful thinking, but it is noticeable--and appreciated. Far too often software developers concentrate so much on new features that they don't bother to optimize the system so that it runs fast and is responsive. Apple has not done this, at least not for Tiger. The first version of OS X was almost unusably slow, but with each iteration Apple has tweaked things and made the OS more responsive. But with Tiger, most of the improvements seem to be under the hood.

So, on to individual features.

Installation. Tiger is the first Mac OS update that is contained entirely on a single DVD-ROM, rather than on multiple CD-ROMs. This is fine for most computers less than a couple of years old, but if you have an older Macintosh that otherwise meets the minimum system requirements to run Tiger but doesn't have a DVD drive, you have a problem. If you want to install Tiger on such a machine, you have to utilize Apple's exchange program, in which you pay $9.99, send back in your system DVD, after which Apple sends you the system installers on CD-ROMs. Very annoying, particularly since I happen to have one computer that can run Tiger but does not have a DVD drive. I can understand why Apple did this, given that nearly all of its computers made more recently than about three years ago have DVD drives or DVD-R drives, but many Macs older than that could run Tiger (and would benefit from its peppier speed). As with the last release, there are three installation options: update (which updates the old system); archive and install (which archives the old system and installs a clean copy, with or without maintaining all the user settings, depending on what you choose); and format and install (formats the hard drive and installs). As usually, everything worked smoothly.

Spotlight. This is the feature everyone's talking about. Spotlight is a system-wide search engine that looks not just at the names of files but what's inside files. It indexes everything on your computer in the background and allows it all to be searched. You can type a search term, and Spotlight will retrieve every file, e-mail message, contact, music or video file, image, URL, PDF file, application, etc. that matches the search term, all arranged neatly by type. Better yet, it's lightning fast. This feature could well change the way people use computers, because it will become much less important where a file is located when it can be found very rapidly by Spotlight. This feature will probably mean less to people like me, who are anal-retentitive when it comes to arranging files in well-organized nested folders and who know pretty much where every file they want to use is anyway. However, most people don't organize their files and folders like that. One really useful feature that comes from Spotlight is "smart folders." These are in essence saved searches that are stored in a different kind of folder. They update automatically and can serve as a convenient means of accessing documents meeting certain search criteria.

Dashboard. Dashboard is a way to have a number of small "one-trick pony" applications (called "Widgets") that can be accessed in an instant on your desktop to do various useful things, like check the time and weather, function as a calculator, track flights, look up people in various directories, among others. Widgets zoom in from the sides to sit in front of your desktop at the touch of F12 and zoom out again. Hitting an icon in the corner brings up a line of icons for all the available Widgets. Clicking on a Widget activates it, with a really spiffy "rock in a pond" kind of effect. This is way some cool eye candy. However, eye candy is useless without function, and fortunately the number of features you can have as Widgets will likely increase as developers write more and more of them. All in all, Widgets remind me of a really sexed-up version of Desk Accessories from back in the days of System 6 and before. (I know, I'm dating myself, given that System 6 was supplanted by System 7 in 1991.) All in all, Dashboard is a nice feature, but nothing earthshattering. I'm not sure I find this feature all that compelling.

Automator. Applescript is an incredibly useful scripting language, but it's in essence a programming language (albeit a simple one). Most people can't access its power (or won't take the time to learn it). Automator provides a simple graphical user interface to build one's own workflows. I haven't had much of a chance to use it yet, but in my limited testing it seems to work well. I suspect this one will grow on me over time as I discover its features and design custom workflows for my needs.

Safari. Apple updated its standard web browser with a really nice feature. Safari 2.0 now handles RSS newsfeeds with aplomb. If a web page has a newsfeed link on it, a little "RSS" emblem will appear in the navigation toolbar. Click on it, and the feed is added to your bookmarks. It's simple, elegant, and functional. Another nice feature is that you can open the RSS feeds in a folder all at the same time in tabs or you can choose "View all RSS articles." Safari's RSS reader doesn't have a lot of bells and whistles, but I don't need a lot of bells and whistles. Best of all, I can keep my newsfeeds and bookmarkes to websites all in the same places; there's no need for a separate application. I'm now going through all the links to blogs and news sources and saving them as RSS feeds. One other feature containing Apple's patented eye candy is RSS Visualizer, which is a screensaver that scrolls headlines from RSS newsfeeds. Of course, just doing that is not enough for Apple. Oh, no. Apple has to have the headlines swoop in and swirl around a central line, like a DNA helix or a spiral staircase, with blue and green, vaguely cloud-like patterns swirling in the background. Oddly enough, I like it. I've set my screensaver to show New York Times RSS newsfeeds.

Mail. Pesonally, since OS X debuted, I've had a love-hate relationship with Mail. Its trainable Bayesian spam filter was my favorite feature. It's far better than Microsoft Entourage's anemic spam filter, but Mail's interface had a number of irritating quirks to it, not the least of which was the irritating "drawer" that popped in and out on the side. Also, it lacked a lot of features that I took for granted with Entourage, especially the rather elegant way Entourage can handle mailing lists. Apple still hasn't added a feature equivalent to Entourage's ability to handle mailing lists, but it has improved its interface greatly and eliminated most of my pet peeves. One cool new feature is the "smart mailbox," which is basically like the smart folders in the Finder or smart playlists in iTunes, only for mail. Best of all, if you have a .Mac account, you can now sync all of your mail, filters, accounts, and mailboxes across as many computers as you like, just as you could sync all your bookmarks, iCal schedules, and contacts. That's the feature I'll be using once I get my main computer back and set up Mail on it the way I like it.

There's a lot of other stuff there, too, but those are the major features. Besides, I'm guessing that all the Windows afficianados have either stopped reading long before this or are bored to tears. That's OK. When you live in a world where the percentage of computer users using Macs numbers in the single digits (as I do), you're used to being ignored by the bulk of the computer world; so I have little sympathy for Windows users who complain about all the hype surrounding Tiger, the iMac, the iTunes Music Store, or the iPod, or whatever. I'm sure that, whenever Longhorn makes its appearance in 12-18 months, the hype will be nonstop, probably enough to drown out any hype over what no doubt will be Mac OS X 10.5 coming out around the same time. (Sorry, couldn't resist the dig.)

In any case, I like this upgrade. It adds a fair number useful features and boosts performance. That's a rare combination for an operating system update, regardless of platform.
Email Post