Store Wars. I realize this is propaganda for the organic food industry, but it's just funny enough that I think it's worth looking at, particularly with a new Star Wars movie only four days away. If Darth Tater and Cuke Skywalker don't give you a chuckle, then you're just not geeky enough. (Via Ubergeek Chic.)


Restaurant badness. Fat Eye for the Skinny Guy points out the incredibly annoying things people do when eating out Here's one: The "how about we all order different things and pass them around the table" group. I agree. To me, this practice is only acceptable in a Chinese restaurant. Quote from Fat Eye:

Group ordering, to a fat dude, is like playing a warped game of Russian Roulette. It all comes down to plate placement and plate passing. In any group ordering situation, there will usually be about 1 to 2 dishes you really want to tackle. Now, it's up to Jesus and the waiter as to where those dishes are going to be placed upon arrival.

At last, a day off from crushing tracheas (well, not quite). If you've ever wondered what a Dark Lord of the Sith does on his day off, go here and be enlightened. 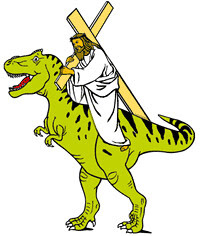 Intelligent design is neither intelligent nor design. Finally, given that much of last week was devoted to the refutation of some of the more silly "intelligent design" apologists, it's only fitting to finish this Sunday roundup with that theme. To start with Jesus' General takes the time to praise Dr. G. Thomas Sharpe of the Creation Truth Foundation for his work teaching children about God's gospel lizards. In the meantime, Tinfoil Hat Pundit suggests a rather disgusting experiment "intelligent design" creationists might set up to disprove Darwin.

Finally, check out the "science" (and I use the term very loosely) that creationists are encouraging school children to pursue as "evidence" against Darwin. I'm still not sure if this is a parody or not, given some of the "experiments" presented. For example: "Using Prayer To Microevolve Latent Antibiotic Resistance In Bacteria." Please, someone, tell me this whole thing is a joke, along the lines of the reDiscovery Institute! They can't be serious, can they?

Why historians should stick to history. Via Pharyngula, I've become aware of a truly awful piece by an historian "questioning" evolution, entitled, The Theory of Evolution: Just a Theory? Ugh. The title alone tells me all I need to know about the author's knowledge. Naturally, reading PZ's evisceration of this piece was enormously entertaining, as this article is full of some of the most idiotic creationist drivel I've seen in many weeks. It even includes hoary old creationist/intelligent design canards such as the "evolution appears plainly impossible," "no one has ever observed an example of speciation," and "new traits or organs must appear fully formed, rather than in stages, to be useful" variety. Get this man to Talkorigins.org, STAT! This is the very reason I don't stray too far out of my area of expertise. When I blog about history, it's generally only about history that I personally have studied and always with some trepidation that an actual historian will tell me that I'm an idiot. Clearly Professor William Rubinstein, the author of this travesty, has not studied enough biology to avoid making a fool of himself. I tried to leave a comment, but it appears that the "staff" has not permitted it; so I'm leaving a TrackBack.
Email Post