Bets on when it will level off? (Site notes)

When I first started this blog on a whim back on a cold and dull Saturday in December, I was skeptical that anyone would ever be interested enough to read my ramblings on a regular basis. Nonetheless I plunged in, driven by the enormity of my own ego and a desire to apply my more informal writing skills (as opposed to my technical writing skills) honed during my years on Usenet to a different challenge. Oddly enough, it seems that there are actually some folks out there who like to read what I like to lay down. I was checking out my Sitemeter readings on Sunday, and to my continuing amazement the figures are continuing on an upward trend, with no sign yet of leveling off. Thanks to some good initial buzz from some older more established bloggers like PZ and Ophelia, among others, plus (I hope) my own inimitable style and a more than a little dash of utterly shameless self-promotion, this blog continues to grow. Don't believe me? Check it out: 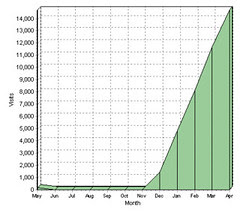 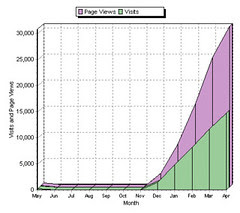 I don't show these to toot my own horn. (OK, maybe just a little, but cut me some slack. The last time I did this--in December, less than a couple of weeks after I started this blog--the figures were nowhere near what they are now.) I do it simply because I remain utterly amazed that, even almost five months later, the hit count keeps going up, with no sign (yet) of leveling off. No doubt it will level off, but when and at what level? (I'm guessing it's probably nearing the point at which it will level off, but we'll see.)

All I can say is thanks to those of you out there who read my craziness and fuel this blog's continued growth and to those other bloggers who boosted Respectful Insolence early on. I hope to continue to improve upon the experience that is Orac's Respectful Insolence. Of course, there's a long way to go. PZ, for instance, has shown the way, recently having registered his 1,000,000th hit. If my hit count levels off soon, as I think that it probably will, I estimate it will take me around seven years of blogging for me to reach that milestone; compared to many bloggers, even specialized ones, I'm still just strictly small fry. However, as far as I can tell, I am the only M.D./Ph.D. surgeon-scientist with NIH funding in the blogosphere, and maybe that counts for something. (Now watch, someone else will pop up in the comments and tell me I'm wrong! Heck, I'd even be happy if someone would. It's lonely being the only one in a niche in the blogosphere.) Some ask where I get the time. Funny they should ask. I'll save that topic for a day when I can't think of anything else to blog about (although I will say that it helps a lot not to have any other hobbies at the moment other than reading).

I'll get back to the science and medicine blogging by Monday at the latest. It's been two weeks since I got back from the AACR Meeting, and I still haven't gotten around to most of the topics from the meeting that I had planned to write about. (After last week, I kind of needed a change of pace, and doing the science pieces takes a bit more effort and thought than some other topics.) It's high time to do some science blogging and some skeptical debunking of quackery and pseudoscience!

In any case, all of the above having been said, this looks like as good a place as any to solicit a little reader feedback, something I don't recall ever having done before other than leaving most of my posts open for comments. What is it about this weblog that you like? That you don't like? How could it be improved? (No, a brain or personality transplant for Orac is not an option. Sorry.) And, let's not forget the ever-popular question that I've been contemplating (and periodically annoying my readers by vacillating about) for many weeks now: Should I dump Blogger and move to TypePad or some other more robust blogging platform?
Email Post