A day of mourning for Trek fans 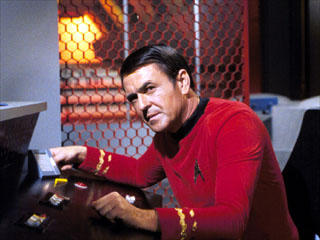 James Doohan (a.k.a. everyone's favorite engineer "Scotty" on the original Star Trek) has died at age 85 from pneumonia and Alzheimer's disease. Little known about him was that he was also a veteran of D-Day on Juno Beach in Normandy. He was wounded in action, narrowly escaping death after being shot six times and losing a finger.

He will be missed. If I actually owned a bottle of fine old scotch, tonight would be the night to break it open and drink a toast to a dear departed friend.
Email Post