A machine that fought fascism

I had had something entirely different lined up to post today (it was even all written a couple of days ago!), but somehow my heart just wasn't in it; it was not entirely serious. It'll have to wait until tomorrow or Monday. I was actually a bit depressed by the partisan finger-pointing that my simple expression of solidarity yesterday morning provoked. I honestly hadn't expected that, at least not on the very day of the bombings, while people were still trapped in the bombed-out subways. (I expected a lag of a day or two before the partisan blame game began.) Fortunately, I found something that got me over it a bit. I've had this lying around for a three weeks since I first saw it, never having found a good time to post my little commentary. In the wake of the terrorist bombings in London yesterday, I can' t think of a better or more appropriate time to mention this.

A little while back, Anthony Cox of Black Triangle waxed rhapsodical about a sculpture of a Spitfire fighter plane at the Jaguar factory where Spitfires were made during World War II. 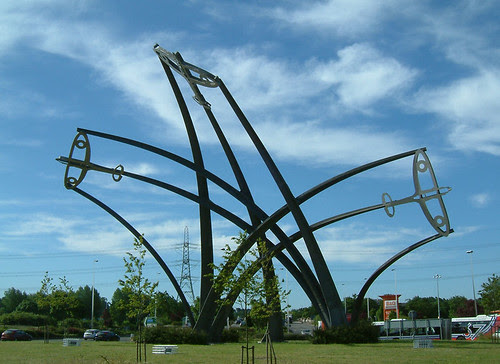 It was indeed a magnificent machine, and I rather like this stylized representation. Without the Spitfire and the brave pilots who flew them to defend Britain against the Luftwaffe during the Battle of Britain in 1940, the war would have been lost before the U.S. ever entered it. For months, Britons endured almost nightly raids on their major cities, and the doughty Spitfire pilots were all that stood between Britain and defeat. The R.A.F. was pounded nearly to the breaking point due to the nightly sorties and the damage caused by attacks on its airfields, but in the end Britain endured. The Germans decided that they couldn't break their defenses and that an amphibious invasion of Britain was no longer feasible. By early 1941, Hitler's attention shifted towards planning the invasion of the Soviet Union. Because the British held on so tenaciously and because of Hitler's impatience and unwillingness to wait to invade the Soviet Union, Hitler plunged Germany into a two-front war that ultimately it couldn't win.

This sculpture reminds me that Britain has been through far worse than what these terrorists, including the Battle of Britain and 30 years of bombings by the IRA. They will endure this as well and emerge stronger for it, as they always have. This experience has led Londoners to be far better prepared to deal with such incidents than we are. I remember the typically blasé reaction of my British postdoc who recently resigned from my laboratory and is scheduled to move back to London in a couple of weeks as she said to me yesterday, "We've been through much worse."
Email Post