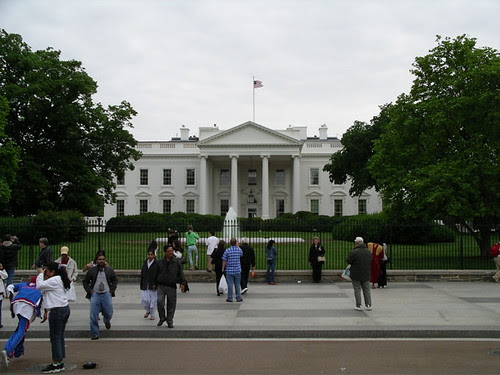 Back in May, I was in Bethesda at a meeting. Because of my interest in World War II history and because I hadn't been to Washington since its completion, I was very interested in seeing the World War II Memorial; so one afternoon I hopped on the Metro and headed down to the Mall to check it out. It provided the material for some photoblogging on Memorial Day. On my way back, I thought it might be fun to wander by the White House before heading back to the Metro. So I did.

I had been in front of the White House at least two or three times before this. Pennsylvania Avenue has changed since September 11, 2001. Traffic is no longer permitted, and there are ugly cement barricades blocking either end of the street on the block that where the White House is located. This day, there were fewer people in front of the White House than any during any of my previous visits that I could recall. The pedestrian mall that Pennsylvania Avenue had become was quiet and almost deserted, except for a few tourists and some souvenir vendors. 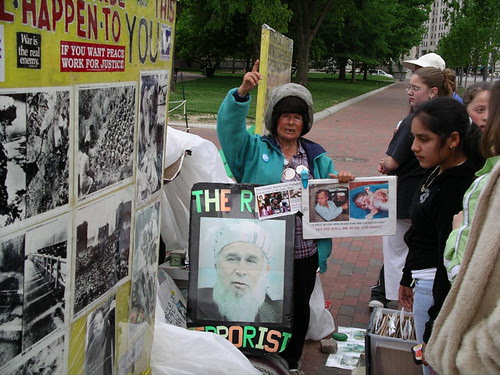 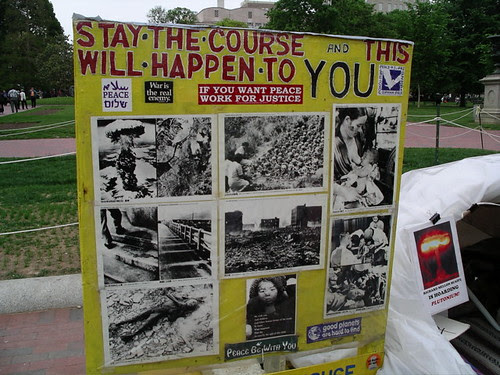 There she was, a shabbily dressed old woman missing a couple of teeth, standing next to her small booth full of anti-nuclear slogans, horrific pictures of dead children, and polemics aimed against the United States and the President in particular (although, oddly enough, she seemed to direct more bile at George H. W. Bush than at his son, the current occupant of the White House). A small group of tourists and high school students on a class field trip, curious, surrounded her, and she was haranguing them about all the evils the United States has done from the beginning of its history. On one of her signs, was a message saying that she had been there since 1981.

Why didn't I remember her from my previous trips to Washington? Could it have been because it had never been as deserted on a day that I happened to wander in front of the White House before? Or had I noticed her before and simply forgotten?

I wondered who she was, what drove her. I certainly didn't agree with her apparent premise that the United States is the root of most evil in the world, which the signs she displayed seemed to imply she believed. So, too, did her words to the tourists and students who gathered around, to whom she went on and on about slavery, Hiroshima and Nagasaki, Gulf Wars I and II, the displacement of Native Americans, and all other transgressions, real and perceived, of the U.S. throughout its history. It was also clear to me that the Hitler zombie had probably had a bit of a snack on her brain, as there were some bad Nazi analogies flying about, not to mention some equally bad Soviet analogies. Yes, she is a crank. But she is a crank who has stayed either in front of or across the street from the White House more or less continuously for nearly 24 years. She is also the kind of crank that I can't help but admire in some strange way, even though I disagreed strongly with her unrelenting hatred of so many U.S. policies.

When I got home, I did some digging. This woman's name is Concepción Piccotto. She is a naturalized citizen, who was born in Spain and emigrated to the U. S. at the age of 18. She's had a rough life, including a very bitter separation and custody battle back in the 1970's, which is what started her activism. For reasons known only to her, she planted herself in front of the White House on June 3, 1981 to protest nuclear weapons and call for nuclear disarmament. She has been there ever since, through Presidents Reagan, Bush père, Clinton, and Bush fils.

She also seems to have some paranoid ideation, as demonstrated in this interview:

Oh, yes, yes. They have arrested me many times. I have that on the website too. Arrested, gassing by police. They use lasers on me, this one night, it was about three or four days ago, on my face and my body — unbelievable what they're doing. And gas, a lot of gas. And they have sort of — might be a laser — because mainly they do it at night-time when I'm sleeping here to rest a little bit. It's like paralyzing my arms and my legs. Like when you hurt your elbow, that sensation, it hurts like that. Oh, it's painful, very painful! Sometimes you can scream, and I do, periodically.

There is no doubt that the police have arrested and harassed her on occasion, and it wouldn't surprise me if, over 24 years, they were occasionally rougher than they should have been when they did. However, I highly doubt that the police use lasers or gas on her at night to paralyze her arms and legs. She may have been harassed on occasion, forced to decrease the size of her signs, and ultimately forced to move across the street to Lafayette Park. She may have had to go to court to protect her First Amendment rights to free speech and to petition the government for redress of grievances. Nonetheless, she is still there, planted right in front of the seat of power in the free world, haranguing tourists and students now, just as she did during the Reagan Administration.

And that got me thinking.

What is it that I most love about my country? Sure, it's my home, and one can't help but love one's home. Yes, I value the ideals that are behind the Constitution, even if we may fail to live up to them with a depressing frequency and even though these days far too many seem ready to give up our Constitutional rights in the name of increased security. But what is it that makes America America, that makes America worth supporting and defending? On this Fourth of July, the answer came to me as I remembered my encounter with this strange and persistent woman who is still protesting nuclear disarmament well over a decade after the fall of the Soviet Union and the end of the Cold War; who has demonized every occupant of the White House since Ronald Reagan; who apparently sees nothing good that the U.S. has done and everything bad; who remains a gadfly to the current occupant of the White House; and who will almost certainly continue to pester whoever succeeds George Bush as President in January 2009.

Unwittingly and unintentionally, Conchita Piccotto has shown me what is great about America. Can you imagine any other government on earth that would tolerate such a protest in front of the very seat of the executive branch of government for 24 years? Certainly not any regime in the Middle East. Certainly not Russia. Certainly not China, where someone like Conchita would have been tossed into a real gulag decades ago. I'm not even entirely sure how many European democracies would put up with such an irritant for so many years without somehow finding a way to remove her permanently from such close proximity to their seat of government. And, no, it's not because of the good will of the police or any President that Conchita remains there protesting. It is because our Constitution gives her the right to be there, and that right has been upheld through the courts in spite of periodic efforts of the police and the U.S. Park Service to remove her every few years. Even the terrorist attacks of September 11, which would have seemed to be the perfect excuse for the government finally to ban her from protesting in front of the White House once and for all (in the name of security and the war on terror, of course), failed to dislodge her.

That is the beauty of our system and our Constitution, despite their flaws. They do not rely on the good will of anyone or any government institution. The Constitution was written by men who understood that we cannot rely on the government to protect our freedom; rather, the government must be limited, lest it inevitably encroach on our freedom. Indeed, one of the things that most disillusioned me most with the brand of conservatism that is now ascendant in this country was how rapidly it was willing to start abrogating our Constitutional rights in the name of an amorphous "war on terror." Also disturbing and unconscionable is the tendency of the right to label anyone questioning the war in Iraq or the diminution of our civil liberties in the Patriot Act and other laws and policies passed in the wake of the September 11 attacks as somehow unpatriotic or, even worse, "treasonous." I cannot and will not associate myself with such rhetoric. To me, it is the critics of dissent that are so quick label those protesting the policies of the U. S. on any issue, the war or others, who are truly un-American. When such rhetoric takes hold is the time I fear for our rights, not when I see an old woman like Conchita annoying tourists who have come to see the White House. Indeed, seeing her gave me hope that we will weather the current difficulties with our Constitutional rights more or less intact, even after the Patriot Act or the attempts to pen in protestors at the Democratic and Republican National Conventions.

In fact, as a patriot, I hope that Conchita Piccotto remains in Lafayette Park for many years to come, preaching her adamant opposition to the policies of the U. S. I want as many tourists and high school students as possible to see her, as an object lesson that in the U.S. peaceful dissent, even harsh dissent planted right at the very doorstep of the White House, is tolerated. She is civics lesson more perfect than any that any teacher could give. Indeed, Conchita is the best reminder out there that I can think of on this Fourth of July 2005 of what the real stakes are when it comes to protecting our liberty from encroachments by our government in the name of the war on terror and what our soldiers have fought and died for throughout the 229 years since the Declaration of Independence was written. If the government ever succeeds in booting her from her place on Pennsylvania Avenue across from the White House, it will be a sad day indeed for our Republic.