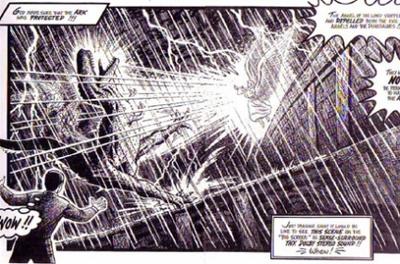 A while back, I mentioned a creationist cartoon in which evil "fallen" angels lead dinosaurs in an attempt destroy Noah's Ark. Now, via Jesus' General, I've discovered that the cartoonist responsible has a movie pitch:

The manager of the local bank is not a human being.

He is a demon, and he enjoys seeing people come in and sign for their high interest bank loans.

This demon loves money, and loves to see the pain it brings to peoples' lives when they have to default on their loans and lose their homes, etc.

One of the awesome visual sequences in this movie will involve something that has never been done before in a movie, a battle between angels and dinosaurs attacking Noah's Ark

I have little doubt that such a sequence has never been committed to film before (although I can't for the life of me figure out what angels and dinosaurs battling over Noah's ark would have to do with demons cheating unwary borrowers with usurous rates). Now that sounds like an entertaining movie! I'd go and see it. Well, maybe I'd rent it when it comes out on DVD. Or maybe I'd watch it on cable.

But only if nothing else were on and I didn't have anything better to do.
Email Post