The Mighty Thor gets hammered? 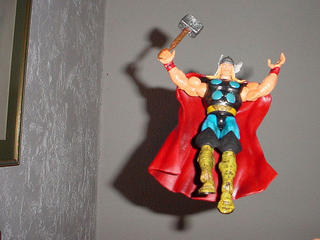 I admit it. I'm in a bit of a strange mood today. If you're looking for the more serious blogging goodness that is usually Respectful Insolence (well, attempts at blogging goodness, anyway), today ain't the day. Today, Orac must have a short somewhere in that plastic box of circuits and blinking lights that makes up its structure, because it feels like posting odd things like this.

I've collected comics more or less continuously for around 30 years now. My longtime favorite was (and still is) Fantastic Four, which is why I can't wait until the movie comes out next week (although as nice as Jessica Alba may be to look at, I think she's too young to play Sue Storm--not to mention the joke going around about taking such a beauty and making her play the Invisible Woman). It actually looks promising, though; and I will have to check it out. However, another of my favorites is the erstwhile God of Thunder. Yes, I collected The Mighty Thor for a long time, before they went overboard last year with the plotline, destroying Asgard, killing nearly every character, and ending the series. 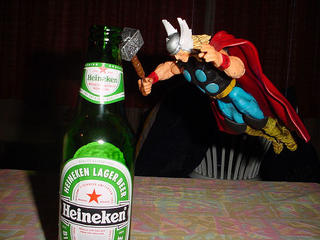 In any case, my longstanding geekiness and love of the comic led me to find this slideshow of Thor getting "hammered" to be oddly hilarious. It's certainly warped. However, I have to give whoever took the picture credit for a fair amount of creativity in posing the figurine.

Come to think of it, given the plotline through which Marvel decided to end The Mighty Thor's 42-year run, maybe it was the writers and artists who were getting "hammered" last year when they conceived and executed the final storyline. (OK, the storyline wasn't bad; I just think they went overboard in several ways. Certainly, some of it seemed to have been conceived and/or written by someone under the influence of the same sort of stuff that Thor was when the slideshow was made.) 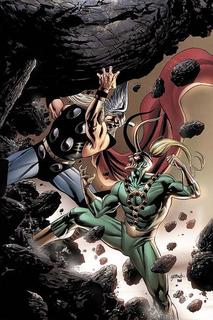 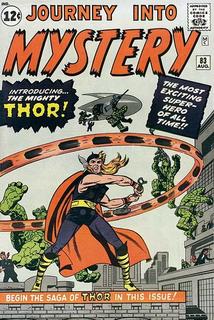 ADDENDUM: Horrified by what it has just posted (well, as "horrified" as it is possible for a megacomputer to be), Orac has started running a series of self-diagnostic routines on its processors. It will take several hours, at least. Hopefully a complete set of diagnostics will be finished and acted upon by tomorrow, so that a special Fourth of July post can be completed and posted without any further silliness, and also so that normal blogging on science, alternative medicine, and, yes, perhaps even another post or two on mercury-autism activism can resume on Tuesday.
Email Post