It's the first of the month, and you know what that means...

June has been an eventful month around the ol' blog. Halfway through the month, Orac jumped full-bore into the mercury-autism debate, laying into the one-sided and deceptive article by RFK Jr on the topic. It was the first big splash this blog has ever made in the blogosphere (but, alas, no Instalanche) and, given the continued developments due to RFK Jr.'s story led to multiple followup posts (1, 2, 3, 4, 5) expanding upon the deficiencies of the arguments used by those claiming that mercury in thimerosal causes autism in general and in RFK Jr.'s article in particular and linking to others who found similar sorts of deficiencies and biases in the Salon.com article. There was a flood of new visitors that lasted about 10 days, but now things are finally returning to more or less the state they were in before the RFK Jr. article, with maybe slightly more numerous average daily visits than before. In the process, I learned a lot, made contact with a lot of other excellent bloggers, some of whom either have autistic children or have and ASD themselves. I also managed to piss off a fair number of activists, one of whom I could almost imagine rubbing his/her hands and salivating as he/she wished that my next child should be autistic, so that I would have to "eat [my] very ignorant and uneducated words," as he/she so charmingly put it.

It was quite educational and, if I do say so myself, resulted in some of my better work. However, as the story has faded in intensity, so too will my blogging on this particular topic. No, that doesn't mean I won't continue to revisit it from time to time (particularly if activists actually succeed in getting Congressional hearings this fall; that would be too fat and juicy a target), but it does mean that whole weeks may actually manage to go by without my mentioning the thimerosal or autism. I do have one or two pieces in mind that I'll probably finish up over the weekend and post sometime next week, but after that, unless something new that I can say something useful and interesting about comes up, I'll be trying to move on for a while. (Whether I'll succeed or not is another matter entirely, of course, given the way events have an uncanny knack for dragging me back to these topics). There's so much more out there that needs critical thinking skills applied to it.

While the frenzy due to my foray into mercury-autism hysteria was going on, though, Orac, mischievous computer that he is, still somehow managed to have a little fun by unleashing a new creation, a dreaded undead eater of politician's brains (1, 2, 3, 4, 5). This zombified creation has gone back into his crypt for now, but he just might be coming back sooner than I had planned, thanks to an e-mail sent to me the other day about an unholy (and quite unexpected) confluence of two of my major blog topics. Stay tuned.

So, now that June's over, how best to inaugurate July? Regular readers already know the answer to that question, but those of you who are new, perhaps having decided (I hope) to stick around and become regular Orac-philes after first encountering Respectful Insolence through my posts on the mercury-autism controversy, probably don't. Indeed, you may not want to know. Of course, that never stopped Orac before. Come, new readers, it's time for you to be initiated into one of the greatest mysteries of Orac!

Yes, no matter how much the antivaxers and alties might like to use him as a weapon to mock Orac, by ancient tradition (of, oh, seven months or so), the first of every month is dedicated to the de facto mascot of this blog, and so it shall continue. Orac did not abandon him last month when his involvement in debunking overblown conspiracy theories about thimerosal-autism links was in its infancy, brought on by some hysterical articles at the Huffington Post on the topic, nor will he do so this month. Yes, even at the risk of driving away the new readers who've decided to stick around after first encountering this blog because of posts on the thimerosal/autism controversy or of puzzling (or even horrifying) new visitors coming over here from the History Carnival today, it's time once again for Orac to indulge his computational circuitry's odd obsession with that huge green, white, and orange Fleet Pharmaceuticals mascot and defender of colon health, the one with the hat whose shape and function you really don't want to contemplate too carefully. 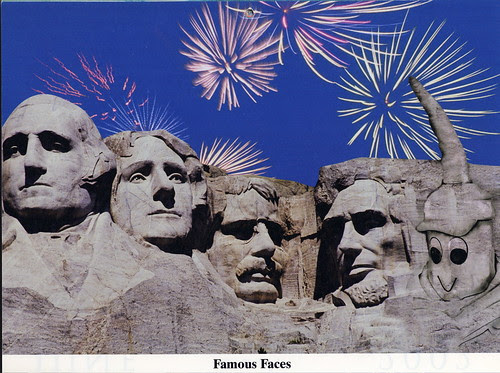 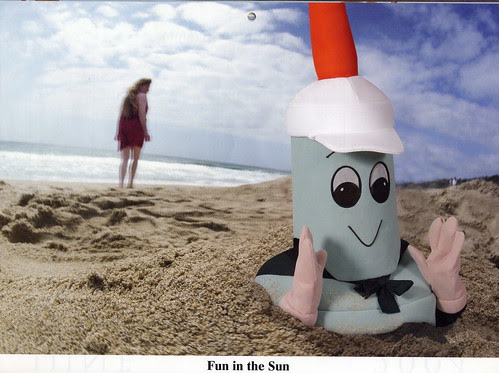 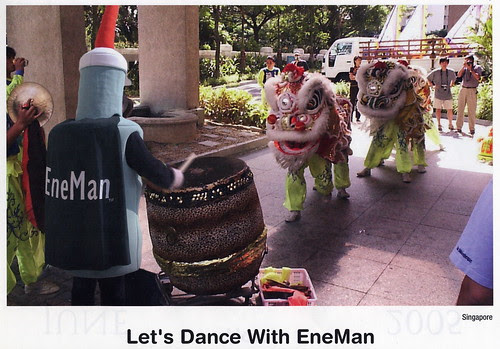 July 2005
You know, it just occurred to me that of late the Hitler zombie seems to be trying to displace EneMan in the role of blog mascot. The current mascot, however, will not be so easily displaced, nor will he give up his hallowed place in the Respectful Insolence pantheon without a fight, even if he is limited only to monthly appearances. EneMan is a lot tougher than he looks, and it'll take more than an undead Führer to drive him away. Perhaps someday he will have to battle the Hitler zombie for the right to be the permanent mascot of this blog. Now that would be a smackdown I'd like to see! Certainly, given the function of EneMan's hat, I know I wouldn't want to try to eat his brain if I were the Hitler zombie. Of course, the Hitler zombie is a zombie; so perhaps the thought of what EneMan's hat is used for would not bother him in the least--assuming he retains any ability for thought at all. For now, however, EneMan reigns supreme.

But I digress again.

And, once again, for those of you new to the phenomenon that is EneMan, here is a list of all of his previous appearances, so that you can catch up and then say that you, too, have been touched by the wonder that is EneMan: