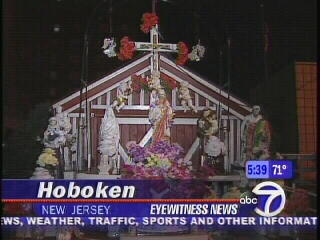 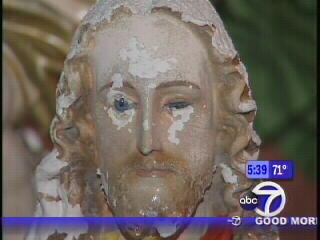 I'm not sure if this qualifies as pareidolia or not, but there's yet another religious vision being reported in Hoboken, New Jersey. (Tip o' the hat to my wife for letting me know about this story.) Apparently, believers report that a statue of the Sacred Heart of Jesus in a Nativity scene (I'm not sure why a Sacred Heart statue would be in a Nativity scene myself, but never mind) is "alive." They report that they've seen it open its right eye and turn its head towards the crowd:

Julio Dones' Catholic shrine has fronted a housing project in Hoboken for three decades, its statues of saints and crucifixes viewed as a positive diversion from area drug deals.

But these past two days, word that the shrine's Sacred Heart of Jesus statue spontaneously blinked its right eye twice and kept it open -- while its left eye stayed closed -- sparked more excitement there than ever. Both of the statue's eyes are normally closed, Dones said.

This has caused a pilgrimage to the area similar to the recent religious fervor that occurred because a stain in an expressway underpass in Chicago was thought to be a vision of the Virgin Mary or another incident in Perth Amboy, New Jersey, where a pattern on a window was also thought to be a vision of the Virgin. (My wife, who happened to be in Perth Amboy five years ago around that time, actually personally witnessed the Window Virgin. She told me it looked "like a smear that you get when you use Windex on a window that isn't completely dry.") The reaction has been the same:

Dones, a 52-year-old neighborhood preacher who attends the nearby St. Francis Roman Catholic Church and maintains the shrine year-round, said he first saw the blinking after a friend alerted him to it Thursday, around 2 p.m.

He said tears flowed from the eye, and that Jesus' head turned to the right.

"I felt a chill going up my body, the Holy Spirit coming upon me," he said. "I ... told the people to come see the great sight that just occurred. See, people don't understand what God does. God does things in mysterious ways."

Dones, who found the statue in the trash in Jersey City a year ago, said a woman who stopped by yesterday saw the right eye blink and began crying.

Yesterday afternoon, not everyone who stopped by said they believed. Some were amazed at the similarities in the Jesus statue's eyes and Dones' eyes. Dones is blind in his left eye, and his eyelid droops.

I'm sorry, but once again, as with the case of Underpass Virgin and Window Virgin, I just don't see what the faithful claim to see. My faith must not be strong enough, I guess. What I do see is an old, beat-up statue of Jesus with one of the eyelids broken off, leaving the eye exposed. Whether it was always that way or whether someone damaged it, who knows? Indeed, the fact that the open right eye now makes the statue look like Dones has to make you wonder about kids pulling a prank. But a bona fide vision? I don't think so.

I'm also not sure how to classify this particularly religious vision. I don't think it is pareidolia, because pareidolia is seeing an object in a vague pattern or form, like seeing the Virgin Mary on an expressway underpass stain or seeing a vision of Lenin in a shower. Perhaps a little research will lead me to a specific term to describe this sort of wishful thinking vision.
Email Post