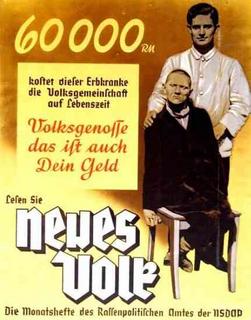 As longtime readers know, I've had a longstanding interest in the Holocaust. A precursor of the Holocaust was known as the T4 euthanasia program. This was a program in which as many as 200,000 people deemed "useless eaters" or "life unworthy of life" were "euthanized" (a euphemism for "murdered," actually) by a variety of means, including starvation, overdoses of narcotics, poisoning, and early prototypes of gas chambers later used to to such lethal effect. The T4 program, which ran from 1939 to 1941, when Hitler ordered a temporary halt to the program due to protests from churches and the victims' families, provided the development and proving grounds for methods of mass murder that would later be expanded to the industrialized killings of millions from 1941 until the end of the war. Indeed, Josef Mengele himself learned his trade in this program. Of course, even this "temporary halt" was nothing of the sort. The program continued in secret.

A recent article got me thinking about the T4 program again. Why it did so will become apparent in a moment, but first I would like to list a few quotes from the article. They are quotes justifying the "euthanasia" of the "feebleminded" from around the appropriate time period:
Here's an interesting question for you. What is the source for each of those quotes? They are all consistent with the rationales that Nazis used to argue for "euthanasia," namely not wasting society's resources and the supposed "mercy" that killing such children would be. They all date to the 1930's and early 1940's. They all sound as though they came from Third Reich eugenicists.

All but one of them didn't come from the Third Reich, however. Here are the sources:
Yes, the first five quotes come from Americans, the first three from neurologist Foster Kennedy, in an article based on a speech he gave to the American Psychiatric Association in May 1941. The fourth and fifth quote come from an editorial published in the same issue and seem to be considering parents who might object to the killing of their "feeble-minded" children as being worthy of "psychiatric concern." These are all discussed in a fascinating article that appeared a recent issue of History of Psychiatry. (Found via Autism Diva and Mind Hacks.)

Also appearing in the same 1942 journal was an editorial against the killing of the "feebleminded" written by Leo Kanner. Yes, that Leo Kanner, the one who published the first major work describing the condition now known as autism in 1943. Indeed, as part of his argument against involuntary euthanasia of such children, he correctly invoked the Nazis, asking rhetorically, "Shall we psychiatrists take our cue from the Nazi Gestapo?" He did, however, comment that "sterilization is often a desirable procedure" for "persons intellectually or emotionally unfit to rear children," although he did object to sterilization performed "solely on the basis of the I.Q." Even though there was a "point-counterpoint" sort of debate in this journal, it should also be remembered that the journal itself came down on the side of Kennedy, not Kanner.

When looking back at the atrocities of the Nazi regime in the name of eliminating undesirables from the Volk, it is important to realize that the ideas the fueled their quest to kill those deemed burdens on society were not unique to Germany. Far from it. As this 1942 journal shows, advocacy of various types of eugenic measures was widespread in the U.S., including among the most elite physicians in the nation. True, no one was advocating selective breeding or the killing of "lesser races" in the service of producing a "master race," as the Nazis were, but there was a disturbing similarity in the thinking of the medical elite in the U.S. with that of Nazi advocates of racial hygeine. As the History of Psychiatry article points out:

It is surprising that a debate on murder could have appeared in the most prominent psychiatric journal in the USA at the time. But as historians have noted, eugenic sterilization was legally sanctioned in the USA long before the Nazi sterilization law of 1933. The logical progression from sterilization (killing presumed genes) to ‘euthanasia’ (killing presumed gene carriers) occurred much more slowly in the USA, but accelerated in the early 1940s under German influence. The progression from sterilization to killing is ‘logical’ because, once it has been established that the state should actively participate in preventing the reproduction of ‘genetically undesirable’ people through compulsory sterilization, it eventually seems more ‘efficient’ to wipe out the alleged gene carriers themselves. In a chilling and prophetic statement in 1923, Swedish Member of Parliament and sterilization opponent Carl Lindhagen asked, ‘Why shall we only deprive these persons, of no use to society or even for themselves, the ability of reproduction? Is it not even kinder to take their lives? This kind of dubious reasoning will be the outcome of the methods proposed today’. 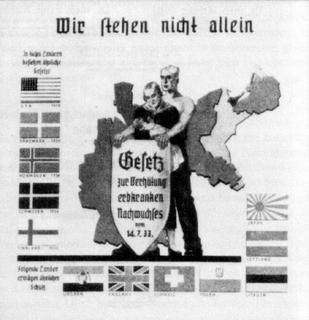 How prophetic were Lindhagen's words!

It was only the postwar revelation of all the atrocities the Nazis committed in the name of eugenics and racial hygeine that utterly discredited this sort of thinking in the U.S. Yet, at the eve of our entry into the war, in the most prestigious psychiatric journal in the U.S., prominent physicians were debating, in essence, whether the Nazi approach to dealing with severely disabled children was the correct one, with at least as many prominent neurologists and psychiatrists arguing that it was as arguing that it was not. (Indeed, early in his regime, Hitler himself spoke approvingly of the compulsory sterilization programs that had been implemented in several states in the U.S. by the 1930's.) We should not forget that, particularly in an era in which the genetic basis of psychiatric diseases are being discovered, lest history repeat itself.
Email Post