Please excuse my while I vomit...

Via an e-mail list I belong to, yesterday I learned of Prussian Blue, a duo of pretty 13-year old blonde twins named Lynx and Lamb who like to sing songs like Aryan Man Awake and Sacrifice (a tribute to Rudolf Hess) They're from Bakersfield, CA and have become darlings of the white supremacist and neo-Nazi circuit:

"We're proud of being white, we want to keep being white," said Lynx. "We want our people to stay white … we don't want to just be, you know, a big muddle. We just want to preserve our race."

Lynx and Lamb have been nurtured on racist beliefs since birth by their mother April. "They need to have the background to understand why certain things are happening," said April, a stay-at-home mom who no longer lives with the twins' father. "I'm going to give them, give them my opinion just like any, any parent would." 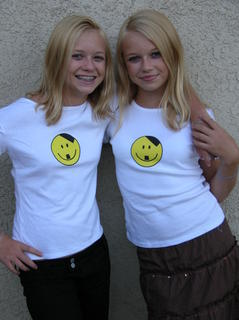 April home-schools the girls, teaching them her own unique perspective on everything from current to historical events. In addition, April's father surrounds the family with symbols of his beliefs — specifically the Nazi swastika. It appears on his belt buckle, on the side of his pick-up truck and he's even registered it as his cattle brand with the Bureau of Livestock Identification.

"Because it's provocative," explains April of the cattle brand, "to him he thinks it's important as a symbol of freedom of speech that he can use it as his cattle brand."

Sounds like their father is guilty of child abuse to me. One also has to wonder whether he's dropped one of those cattle brands on his head. (The Nazi Swastika, a symbol of freedom?) But, worse, the twins' popularity is growing, such that David Duke uses them to draw a crowd, and their music is being used as propaganda, with the hope that, as young fans mature, they are drawn to harder stuff:

Since they began singing, the girls have become such a force in the white nationalist movement, that David Duke — the former presidential candidate, one-time Ku-Klux-Klan grand wizard and outspoken white supremacist — uses the twins to draw a crowd.

Prussian Blue supporter Erich Gliebe, operator of one of the nation's most notorious hate music labels, Resistance Records, hopes younger performers like Lynx and Lamb will help expand the base of the White Nationalist cause.

"Eleven and 12 years old," he said, "I think that's the perfect age to start grooming kids and instill in them a strong racial identity."

Gliebe, who targets young, mainstream white rockers at music festivals like this past summer's "Ozzfest," says he uses music to get his message out.

But with names like Blue-Eyed Devils and Angry Aryans, these tunes are far more extreme than the ones sung by Lamb and Lynx.

Get a load of the lyrics to one of their songs, Aryan Man Awake:

When the man who plows the fields is driven from his lands.
When the carpenter must give away what he's built with his own hands.
When a mother's only children belong to her no more.
And black masked men with guns come bashing down the doors.
Where freedom exists for only those with darker skin.
Where lies and propaganda will never let you win.
Where symbols of your heritage are held with such contempt
And benefits of country 'cept tax are you exempt.

All one can hope is that, as they get further into their teen years, they rebel a bit against their parents (as so many teenagers do) and renounce this sort of disgusting racist spew.

You know, I need to get back to medblogging and science blogging next week. This sort of stuff raises my blood pressure too much.
Email Post