Time for the Sox to finish the Astros off... 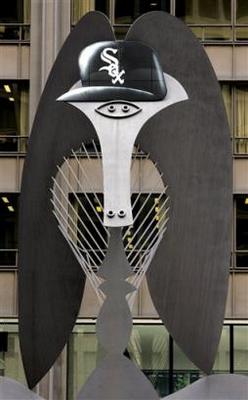 In an exciting game Sunday night, the White Sox pulled out their second victory over the Astros, 7-6. The whole town has caught White Sox fever (well, except for the Cubs fans). Indeed, even the famous Picasso statue at the Daley Center has gotten into the act.

Tonight the series resumes in Houston. Although I would have liked it better if the Detroit Tigers or the Cleveland Indians had made it this far, having lived in Chicago in the late 1990's, I can't help but root for the Sox to take it all this year. Not having grown up in Chicago, when I lived there, I never felt the need to take sides in the Cubs/Sox rivalry. I can therefore root for both, although I must admit to a tendency to have leaned towards the Cubs more (that was probably because I lived only two "el" stops south of Wrigley Field on the Red Line). It also probably didn't help that I had just moved from Cleveland after having lived there for 8 years and was having trouble moving my allegiance from the Tribe.

In any case, I'll be watching tonight, assuming I get home in time...

Speaking of the hapless Cubbies, they need to be next up, although I think it would be most appropriate if they waited until 2008 to take the World Series. Think of it: A century of futility broken by triumph!
Email Post